Verizon Wireless subscribers have been waiting a long time for the iPhone to come to the carrier, and soon they will be waiting no longer, as Verizon is expected to offer Apple’s game-changing device within the next several weeks.

Verizon knows it will be a hot seller, and that along with massive amounts of sales, will come massive amounts of data use, but the carrier is prepared for that, and the solution, at least at this point, isn’t tiered data plans. A Wall Street Journal piece, co-authored by Spencer E. Ante and Yukari Iwatani Kane reports:

Verizon Wireless has been beefing up its network and believes it will have no problem handling iPhone-type loads, a claim that could be put to the test this year if the carrier signs up millions of subscribers using the Apple Inc. device.

Verizon Wireless, the country’s largest wireless carrier, is confident enough in its network that it will offer unlimited data-use plans when it starts selling the iPhone around the end of this month, a person familiar with the matter said. Such plans would provide a key means of distinguishing its service from rival AT&T Inc., which limits how much Internet data such as videos and photos its customers may use each month.

Recent reports indicate that Android devices have surpassed iPhones in the U.S. (comScore), in terms of smartphone subscriptions, but so far, iPhones have only been available through AT&T. The addition of just one more carrier in Verizion could give Apple a big boost in momentum. 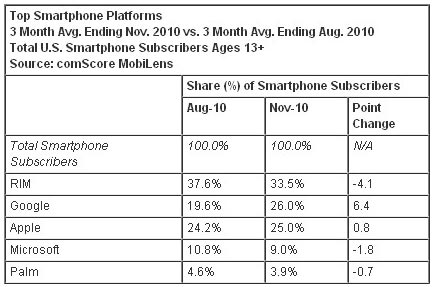 The Uphill Battle of Building a Web Analytics Culture

Blekko CEO On The "Useless Garbage" Of The Web