Verizon Named Mobile Brand Of The Year By Consumers

Verizon has been named the mobile networks brand of the year among consumers for the second year in a row, according to a new poll from Harris Interactive.

“Since the change in the portability of phone numbers, switching mobile phones and mobile networks is significantly easier,” said Jeni Lee Chapman, Executive Vice President of Brand and Communications Consulting with Harris Interactive. 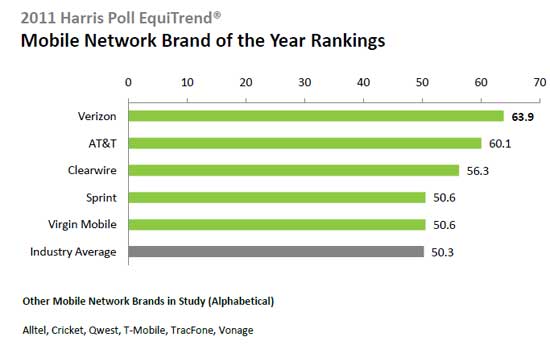 “Verizon’s strong brand equity can have a large impact when consumers have a choice.”

Motorola, driven by strong familiarity and a significant improvement over last year, led the mobile phones category, followed by HTC and Sony Ericsson. Nokia was fourth and Apple ranked fifth.

“Apple may have the market cornered on technology enthusiasts, but Motorola satisfies a much wider audience,” said Ms. Chapman.

“There is still a large audience of consumers that aren’t interested in a smartphone running their life, and Apple doesn’t have a product to meet that need.”

Sony continues to be the market leader in consumer electronics, trailed closely by Samsung, Panasonic and LG, who have all gained ground narrowing the gap in brand equity. In the gaming category, Nintendo ranked highest, followed by Sony and Microsoft’s Xbox.