In the first quarter of 2010, a USB worm took the top spot for malware globally, according to a new report by McAfee.

Threats on portable storage devices took the lead for the most popular malware. AutoRun related infections held the No.1 and No. 3 spots due to the widespread adoption of removable devices, mainly USB drives.  A variety of password-stealing Trojans rounded out the top five. Those include generic downloaders, unwanted programs and gaming software that collects statistics anonymously. The popularity of these threats were consistent worldwide.

The report found spam rates have remained steady, but their subjects vary by country.  China, South Korea and Vietnam have the most diploma spam, spam that offers forged qualifications. 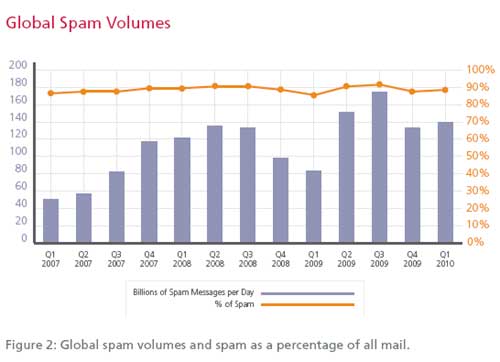 "Previously emerging trends, such as AutoRun malware, are now at the forefront. We were also surprised to find some of geographic difference in spam related topics, such as the volume of diploma spam coming out of China."

Cybercriminals continue to use major news events to manipulate Internet searches. Haiti and Chile earthquake disasters led the list (No.1 and No.2 respectively). The Toyota recall, Apple iPad and NCAA March Madness followed.

Cybercriminals also continue to use analytics and page-ranking logic to exploit hottest search terms and drive traffic to malicious websites.