Nearly half (49%) of the people in the U.S. do not meet the FCC’s minimum broadband standard of 4 megabits per second (mbps) download and 1 mbps upload, according to a new report by the Communications Workers of America (CWA).

CWA’s annual Speed Matters report on Internet speeds in the United States indicates little progress has been made since the report was first issued in 2007.

This year’s Speed Matters report shows that between 2009 and 2010, the median download Internet speed in the United States has increased by only 0.5 megabits per second (mbps) from 2.5 mbps in 2009 to 3.0 mbps this year, while the median upload speed has barely increased from 487 kbps to 595 kbps. 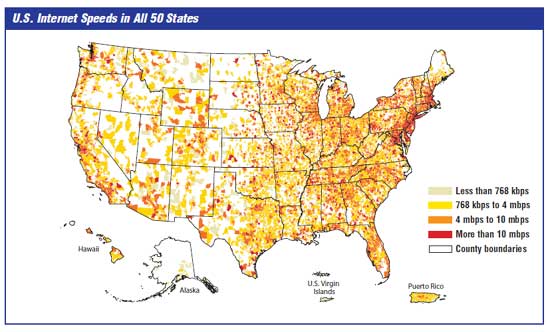 At this rate, it will take the United States 60 years to catch up with current Internet speeds in South Korea, the country with the fastest Internet connections. The number of years to reach South Korea’s current standards has quadrupled from last year, as improvements are being made at a rapid rate there and progress in the United States has been fairly stagnant.

Northeastern states topped the chart again this year, with many western and southern states staying on the bottom. The five fastest states according to the study are: Delaware (13.4 mbps), Massachusetts (9.3 mbps), New Jersey (8.6 mbps), Maryland (7.6 mbps) and New York (7.5 mbps). Among the slowest states were: Montana (1.2 mbps), Wyoming (1.5 mbps), Arkansas (2.3 mbps) and Mississippi (2.4 mbps).

“Today’s results highlight the need for investment in higher speed broadband networks to support America’s critical applications. That’s why moving forward on the National Broadband Plan is our top priority at the FCC.”

YouTube Gives Users a New Homepage To Try Out