URFilez Takes Music Service “Where iTunes & Pandora Fear to Tread”
New York-based URFilez has developed an MP3 service, launching today in Bahrain, saying this is "where iTunes & Pandora fear to tread". The company says it has content from all four major record labels (Sony, Warner, Universal and EMI). The company has also announced a partnership with Bahrain telco giant, Betelco to offer MP3, on-demand streaming and perssonalized radio mobile apps for BlackBerry, iPhone and Android users.
"Digital music services like iTunes, Pandora and Amazon MP3 may be popular in the US, but for those living in the Middle East, piracy and illegal downloads are the only options for consumers wanting to listen to their favorite artists," a representative for URFilez tells WebProNews. "That’s because legitimate services like iTunes, are simply not available in the region."

"Who knows if iTunes, Pandora, Amazon MP3, or any of the other digital music sites will respond with similar services in the region, but it will certainly be interesting to watch," she says. 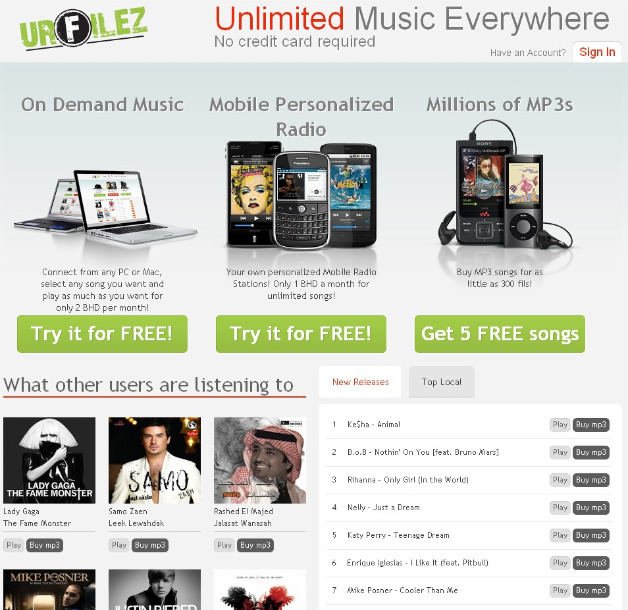 URFilez is run by former Zing Technology (sold to RealNetworks for $75 million) CEO Hassan Miah, who was also formerly the managing director and leader of the entertainment and media investment activity at Intel Capital.
"URFilez plans to expand into Saudi Arabia next, followed by the broader Gulf region by the beginning of 2011, and Asia by the end of 2011 – another area that is rife with music piracy and underserviced by the popular digital download sites," the rep says.
Share This
Previous Article