The Patterson School of Diplomacy and International Commerce at the University of Kentucky (UK) here in Lexington, has taken up an initiative to provide students with iPads for the duration of their degree cycle.

The school’s website says, "This initiative will be ‘soup to nuts,’ encompassing student recruitment, admissions, seminars, graduation, and everything in between. We aim to completely integrate the iPad into our program, transforming the student learning experience, enhancing overall school operations, and preparing graduates to advance diplomacy and international business in the digital age."

The initiative began from some inspiration that came from a screening at the school of the HBO documentary "For Neda", which focused on the Iranian woman who was shot during a protest, and whose death was captured in images, which went viral online as a result of modern technology.

Ambassador Carey Cavanaugh, who is the Director of the school, wrote in a blog post, "Unfortunately, digital tools and skills are anything but standard diplomatic fare.  Throughout my 22-year Foreign Service career I was appalled at the State Department’s slow adoption of new technology…"

"As Apple’s latest creation captured the world’s imagination, I began to weigh how the iPad might be used to enhance teaching international affairs at the masters degree level," he wrote. "In particular, could using the device help provide a cohort of future leaders who would enter the public, private, and non-profit sectors equipped with the expertise needed to advance what Secretary Clinton has deemed “21st Century Statecraft?”  I also thought that graduates who had sharpened their technological skills using iPads might create a kind of demand pull as they enter the workforce and lobby that they must continue using the device to maintain their productivity.  Learning with iPads might help address both shortcomings: ensure graduates enter international careers equipped with the knowledge and tech skills that are increasingly an essential component of their tool kit; and help pave the way for greater acceptance of such mobile devices in official government settings." 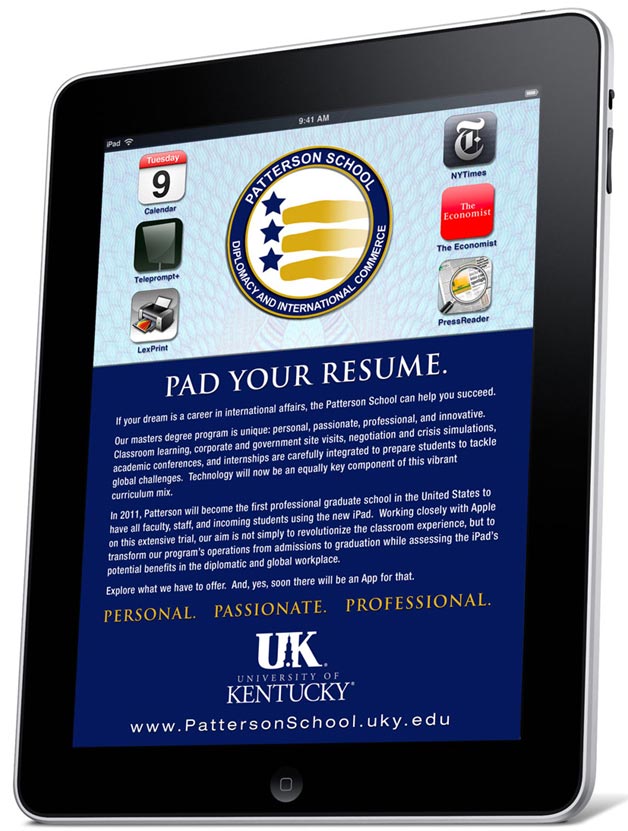 Cavanaugh decided to contact Apple, who ended up sending its Southeast Area Director for Education into town to discuss his ideas. This turned into the school becoming the first professional one to have all its students, faculty, and staff using an iPad for a complete degree cycle, and a trial that Cavanaugh hopes will become a blueprint for other schools to follow.

Dr. Robert Farley, an assistant professor at the school, specializing in national security and intelligence, says he’s looking forward to answering questions like: Does the iPad significantly enhance productivity, is the iPad uniquely useful in the classroom, or in the associated extra-curricular activities of the school, how does the iPad affect the classroom setting itself, and does it help tear down the wall between student and instructor that the laptop has created?

Apple is providing support throughout the 18-month trial period, and will assist with program development and strategy, train students, faculty and staff, and help get them access to developers when necessary.