Many retail sites that cater to people in the UK had a great time of things yesterday.  In keeping with tradition (and barring some strange New Year’s Eve surge), new UK-specific Experian Hitwise data shows that Boxing Day turned out to be the busiest day of the year for online retailers. 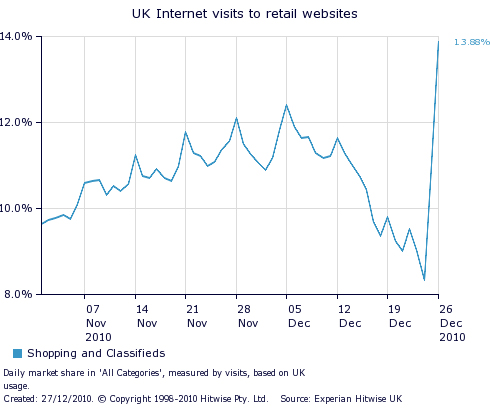 Those as some impressive gains.  As for which organizations they benefited, eBay UK came out on top in the "Shopping and Classifieds" category, according to Experian Hitwise, with a 9.96 percent share of visits.

Then Amazon UK won second place (with a 7.02 percent share of visits), Argos got third (with a 3.53 percent share), and Next, Marks & Spencer, John Lewis, Currys, Debenhams, Play.com, and Comet rounded out the top ten.

Some online-only businesses may have been a little shortchanged, however.  Goad reported, "[O]n Christmas Day the websites of high street retailers received 103% more traffic than their online only counterparts; by Boxing Day that gap had increased to 123%.  This points not only to the strong sale brands of the big high street names such as Next and Debenhams, but also to a lot browse-before-you-buy behaviour."

That’s an interesting reversal of the interrogate-salespeople-then-find-the-best-price-online tactic employed other times of year.