The use of mobile mapping and direction services in Europe in the past year has jumped 68 percent, according to a new analysis from comScore.

In February, more than 21 million mobile users in the EU5 countries (U.K., France, Germany, Spain and Italy) used their mobile handsets for navigation.

The highest growth among EU5 countries was in the UK, with an 86 percent increase to 5.7 million mobile map users. Italy ranked second fro mobile mapping and direction services with 4.9 million users, but had the least growth (53%) compared to a year ago. Germany landed in the third spot with 3.9 million mobile map users, followed closely by France (3.5 million) and Spain (3.1 million). 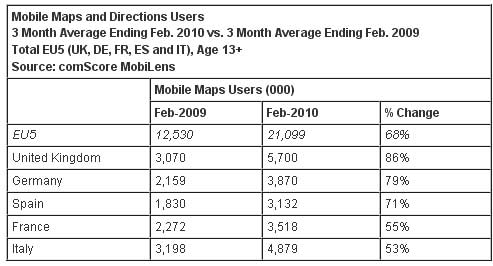 Among those who accessed maps via their mobile devices, most (68.2%) accessed those services in a car or other vehicle.  More than a third (35.3%) of the total users accessed the service while using public transportation, and 27 percent did so while walking, running or cycling.

Mobile subscribers using handsets with GPS are more than 8 percent more likely (71.7%) to use maps in a vehicle than those without (63.9%). The largest difference can be seen among those who use map and direction services on public transposition, with 41.5 percent of GPS users having accessed the service compared to 28 percent of non-GPS users.

"The higher incidence of A-GPS usage in cars suggests that the superior speed and precision in these devices are being used for more than just identifying locations – they are being used as full in-car navigation systems," says comScore Senior Analyst, Alistair Hill.

"That these services offer similar functionality to premium services without the significant price-tag has certainly contributed to their early success," continues Hill. "Mobile mapping services also have potential for integration with other location aware services, such as mobile social networking applications that provide links to friends and insights on surroundings and, subsequently, offer great promise for the location-based advertising market."