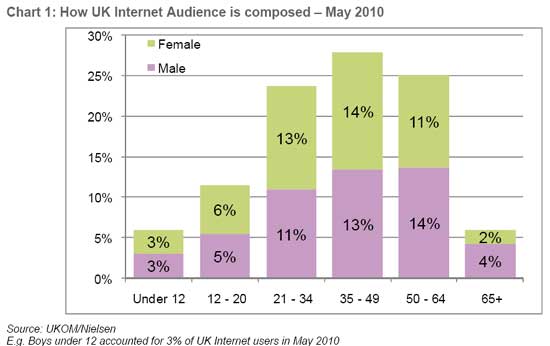 "The Internet is getting older in moreways than one. Not only is the medium itself maturing but the audience is shifting towards older age groups," said Alex Burmaster, Internet analyst, UKOM.

"This growth is a reminder, if one was still needed, that it is very much a form of media utilized by all age groups. The fact that one in four Britons who use the Internet today are 50 to 64 years old proves it is no longer the sole preserve of the young and technical literati."

The types of websites where people over 50 are most likely to visit are a mix of health, video, community, travel, fashion, genealogy, cooking and greeting cards.

People over 50 account for 31 percent of Internet users in the UK. Health website RealAge has the highest number of people this age with 89 percent of its visitors over 50. Video site Flixxy trails with 80 percent, followed by community site Saga with 78 percent.

"This age group have a wide appetite when it comes to the types of sites they are using to supplement the interests and needs they have in the daily lives, said Burmaster.

"Consequently, a number of brands across a range of industries, particularly travel, are showing the rest what a valuable medium online is when it comes to reaching a desired audience who haven’t grown up with the Internet."

"YouTube Ready" Captions Can Add to Your Search Strategy