Companies that sell stuff online may have a rather profitable stretch of years ahead of them if a new forecast from eMarketer is to be believed.  eMarketer thinks U.S. retail ecommerce sales will climb at healthy rates through at least 2015.

The graph below shows the exact figures.  It seems the industry should see a 13.7 percent rise this year compared to last, and although things will slow down over time, a whopping 43.4 percent improvement is supposed to occur if you put the figures for 2011 and 2015 side by side.

Jeffrey Grau, a principal analyst at eMarketer principal, explained in a post, “Two major trends that will fuel online buying growth are mobile commerce and daily deal sites like Groupon.  Both opportunities are expected to have strong sales growth over the next five years.” 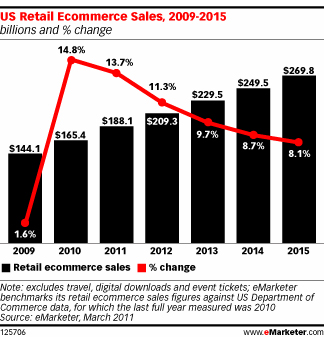 A significant increase in the online population will have an effect, too.  The post stated, “eMarketer estimates 87.5% of US internet users ages 14 and older, or 178.5 million people, will browse or research products online this year.  Of that group, 83% will make a purchase online, for a total of 148.1 million online buyers in 2011.  By 2015, 170.3 million people, or 76.3% of the online population, will make a purchase on the web.”

Now let’s just keep our fingers crossed that reality can live up to these predictions.  Groupon intends to do its part, at least, and PayPal also has big things planned.

Two other small but positive steps towards that end: the Dow and Nasdaq rose today by 1.39 percent and 0.79 percent, respectively.