In January 2011, 270.6 million unique visitors in Europe visited sites in the retail category, representing a market reach of 74.5 percent of Internet users, an increase of 8.5 percent over the previous year, according to a new report from comScore.

Retail sites also had a significant reach in individual markets, representing at least 75 percent of the total online audience in 7 out of 18 European markets. In 2010, one out of every ten Internet sessions in Europe included a visit to a retail website. 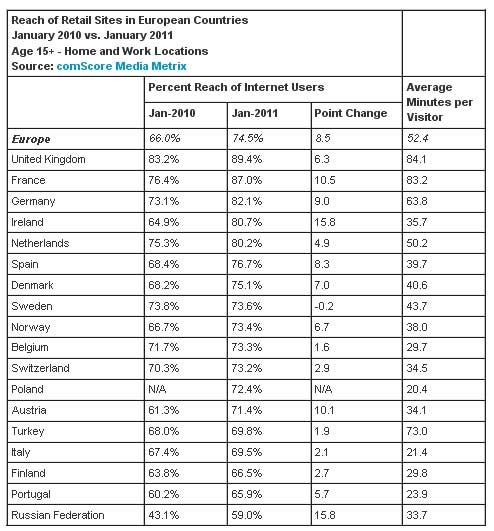 In the United Kingdom, the retail category reached 89.4 percent of the total online audience (up 6.3% from last year) the highest penetration of any European market. France ranked second with a reach of 87 percent (up 10.5 points), followed by Germany at 82.1 percent (up 9 points). Ireland and the Netherlands round out the list of markets with highest penetration, with Retail reaching 80.7 percent in Ireland (up 15.8 percentage points) and 80.2 percent in the Netherlands (up 4.9 percentage points).

Ireland and Russia had the highest growth in retail penetration in Europe, with both markets seeing gains of 15.8 percent, according to comScore. With 40.6 million visitors coming to retail sites in January, Germany remains the largest European market for this category, followed by France and the U.K. with 36.6 million visitors and 34.6 million visitors, respectively.

In January, visitors from the U.K. Led in engagement in the retail category, with an average 0f 84.1 minutes spent on retail sites. France trailed closely with an average of 83.2 minutes, with Turkish visitors coming in next at 73 minutes. Across the board, Europeans spent a collective average of 52.4 minutes, or a little under an hour per visitor, on retail sites in January.

Within the Retail category, the subcategory with the highest market penetration was Comparison Shopping, which reached 31.6 percent of the European market in January 2011, buoyed by Bing Ciao and Shopzilla Sites. Apparel ranked second with a 28.4-percent reach, followed by Consumer Electronics with a 27.1-percent reach.

Ranking the subcategories by engagement, Apparel sites ranked first, with European shoppers spending an average of 23.3 minutes on these sites in January. Apparel sites also had the highest percentage of page views within the Retail category, accounting for 21.6 percent of Retail pages viewed that month.