For better or for worse, Twitter isn’t yet a public company, meaning it doesn’t have to deliver earnings reports the way Google and Yahoo have this quarter.  But an unofficial update on the company’s financial situation is available, as Sharepost has indicated that Twitter’s private valuation has hit $4 billion.

That’s quite a milestone.  Consider that AOL’s market cap is only $2.58 billion and IAC’s market cap is $2.86 billion right now, by comparison, while rumors put LinkedIn’s private market valuation at $2.91 billion. 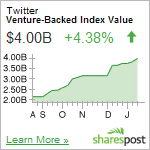 Also, it’s important to remember that Twitter itself was just valued at $3.7 billion in mid-December when it raised $200 million from Kleiner Perkins Caufield Byers and other investment firms and professional investors.

So Twitter’s star is already very much on the rise this year, even as experts predict that the company’s ad revenue might triple by the end of 2011 and increase again in 2012.

That puts new-ish CEO Dick Costolo off to a great start.  As he tries to help Twitter earn even more money, wooing advertisers should be much easier with this kind of support.

Is Facebook's New "Buy with Friends" a Hint at Bigger Things to Come?