Many blogs depend on the practice of sharing for survival, or at least profitability; they can’t count on millions of people to find their own way to every article.  And it turns out that, when it comes to "share" buttons, popular blogs depend more on Twitter’s than any other option out there.

We’re going to skip the causation/correlation debate (do popular blogs turn to Twitter because it’s great, or is Twitter popular because great blogs promote it?) and move straight to the facts: Pingdom employees looked at which share buttons are used by the Technorati Top 100 blogs, and Twitter’s button made 66 appearances.

That’s rather impressive, considering that the second- and third-place options – Facebook and "general share" – tied, showing up only 58 times each.  Then there’s even more of a drop-off as you move down to Digg, which made just 49 appearances. 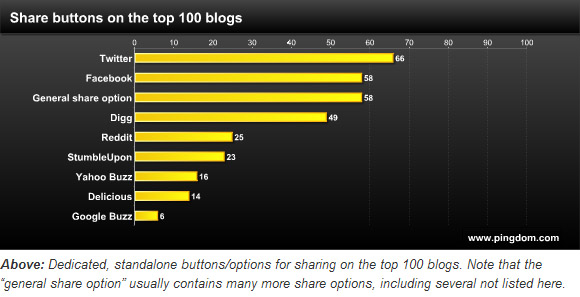 Interestingly, six of the top blogs offered no sharing options whatsoever.  Also, although Pingdom didn’t track email-related buttons, a blog post admitted, "Had we included them, they would have been among the top sharing options."

So there’s some info about the current state of social media as it’s being utilized by the Technorati Top 100.  Feel free to address the chicken-and-the-egg matter in the comments section.

The Next Big Thing in Social Media - Using Your Brain