comScore has released some interesting research on Twitter usage in different countries. The firm found that in June, about 93 million people visited Twitter.com, up 109% from the previous year.

"For applications such as Twitter that function as an instantaneous broadcast medium, the mobile device represents the ideal platform to engage with this content anytime and anyplace," said Graham Mudd, comScore’s VP, search & media. "The advanced web browsing features of smartphones enable this behavior, making it likely to accelerate as these devices gain continued adoption. While desktop-based Internet usage is still king, mobile web usage is surging on a global scale placing applications like Twitter at the forefront of that paradigm shift."

Interestingly, the U.S. is pretty far down the list of Twitter penetration according to comScore’s findings. This was led by Indonesia, followed by Brazil, Venezuela, then the Netherlands, Japan, and the Philippines. The U.S. came it at number 11. 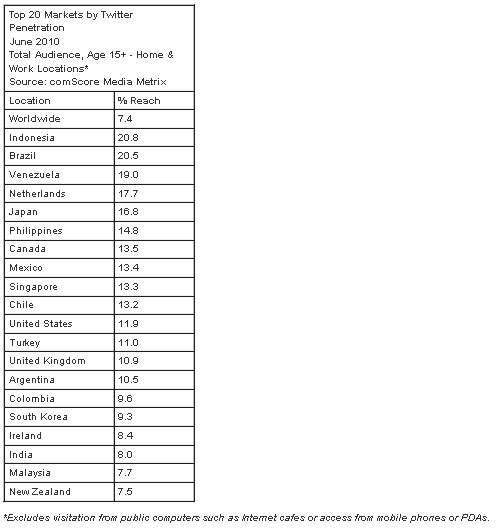 "Twitter.com has experienced an explosion in global traffic over the past year, establishing itself as one of the most-visited social networking sites across each of the five worldwide regions," said Mudd. "Today nearly 3 out of 4 global Internet users access social networking sites each month, making it one of the most ubiquitous activities across the web. As more users around the world have become acquainted with connecting and expressing themselves through social media, it has created an environment where new media like Twitter can emerge globally in a relatively short period of time."

More findings from the research are available here.

Broadband Adoption In The U.S. Slows