Twitter has introduced a new, secure link-shortening service called t.co. All links shared on Twitter.com or third-party apps will be wrapped with a t.co URL.

While links might appear something like this: http://t.co/DRo0trj  on SMS, they might appear more based on the domain they are going to on Twitter.com and in third-party apps. So if that link were going to some Amazon page, it might look more like this: amazon.com/Delivering-.

The company says they will roll this out for security reasons – to prevent phishing via unknown links wrapped in other URL shorteners. They want to "remove the obscurity" associated with most shortened links. 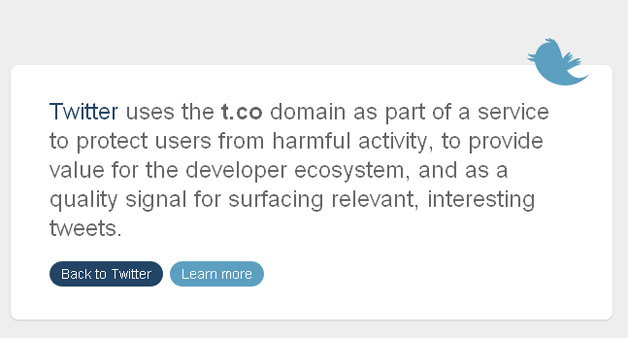 There is a secondary motivation for this move as well. Routing links through this service will also contribute to the metrics behind Twitter’s Promoted Tweets advertising platform. They say this will provide an important quality signal for Twitter’s resonance algorithm. This algorithm is what is used to determine whether or not to promote a tweet. The company even says they will provide other services to make use of this data, such as analytics within Twitter’s eventual commercial accounts service.

"If you are already partial to a particular shortener when you tweet, you can continue to use it for link shortening and analytics as you normally would, and we’ll wrap the shortened links you submit," says Twitter communications guy Sean Garrett.

Twitter is rolling out the new wrapped links on a "handful of accounts" to help developers test their code. Eventually all links on Twitter will be wrapped. Twitter says it will be rolled out more broadly this summer.