Twitter Teams Up With the NFL For Super Bowl 45

If you’re having a hard time keeping up with all the NFL/Super Bowl XLV-related tweets, a new partnership between Twitter and the NFL will alleviate these issues.

A post on the official Twitter blog reveals the details, which will allow users to follow these messages in a real-time format, thanks to a surprisingly-robust page at NFL.com, featuring a map showing what the majority of NFL-related tweets are discussing, a trends tab, and a “Steelers VS Packers” page that shows which team is trending the most

Naturally, this information is derived from how many times either the Packers or the Steelers are mentioned on Twitter, and if it’s anything like last year, both will be mentioned a great deal. 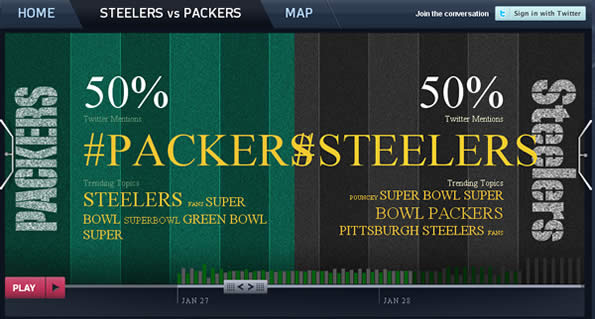 Last year, during key moments of Super Bowl XLIV, about 40% of all Tweets were related to the game. As the game ended, this number was closer to 50%. This year, one-third of the players who were in the NFL playoffs are on Twitter. And, at some points during last Sunday’s AFC and NFC championship games, virtually all trends were football-related.

Considering how much more Twitter has intertwined itself into society, even since last year, it wouldn’t be a bit surprising if, on Super Bowl Sunday (February 6th), 75% of all tweets were related to the Packers/Steelers game.

Other areas of interest on the NFL’s “Twitter Tracker” page include a map of United States, which shows the Twitter/Super Bowl trends in relation to their location.  Obviously, the northeast portion of the U.S. is all about Pittsburgh.

There’s also a “Players” tab, which ranks the highest trending player, according to tweets.

Surprisingly enough, the current leader is Nick Barnett, linebacker for the Packers.  One would expect Aaron Rodgers or Ben Roethlisberger to take that honor.

Another feature allows users to follow the tweets of Super Bowl-related content as well.  This includes players, media and NFL personnel, and it’s featured on the start page on the right-hand column.  Users are also able to respond to a poll question, via their Twitter account, and their responses will be shared across this particular network.

This year, keeping up with all the Super Bowl-related Twitter chatter will be exponentially easier.   Just don’t forget about watching the game, something that tends to get lost as the hype for Super Bowl event (the parties, the commercials) continues to grow.

Unfortunately, the actual game itself gets relegated to an “oh yeah” status from time to time, thanks, in large part, to all the effort that goes into getting the hype machine rolling.

Now You Can Monetize Your Facebook Fans By Promoting Their Likes