Twitter is testing promoted trending topics as reports last week indicated that they would. If you go to Twitter.com and take a look at the trending topic list, you will probably see one with a yellow box marking it as "Promoted."

Currently, the promoted trending topic is "Toy Story 3", a Disney Pixar movie that opens this week. If you click on it, it takes you to Twitter’s real-time search results for Toy Story 3. A promoted tweet from the @DisneyPixar is at the top, above the top tweets on the subject. 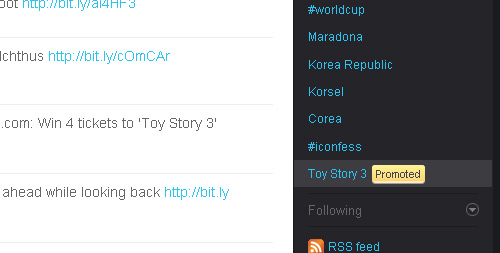 A representative for Twitter told TechCrunch these promoted trending topics are something they are testing for "an undefined period of time."

They also apparenty utilize the same "resonance" metric that Twitter has talked about using for Promoted Tweets. That means users have to engage with it or it will not show up as promoted.

If this feature becomes a staple of Twitter, and not just a test, this will no doubt be a very coveted ad spot, and will probably be dominated by large brands, or other brands that are able to pull off something so fantastic, it gets everybody talking.