For some people, summer’s a time to live at the pool.  For others, it’s a season better spent vacationing in another state or country.  But as it turns out, a lot of people used this summer to become better acquainted with Twitter, increasing the overall number of tweets by 33 percent.

A post on the Royal Pingdom blog stated today, "Twitter processed 2.64 billion tweets this August, an increase of 33% over May.  Not a bad increase over just a summer.  In August, an average of 85 million tweets passed through Twitter every day."

Then the blog post noted, "And if you look at the whole year so far, the increase is even more impressive.  Activity on Twitter has already more than doubled this year (August had 115% more tweets than January)."

That’s quite a lot of growth, as the graph below shows. 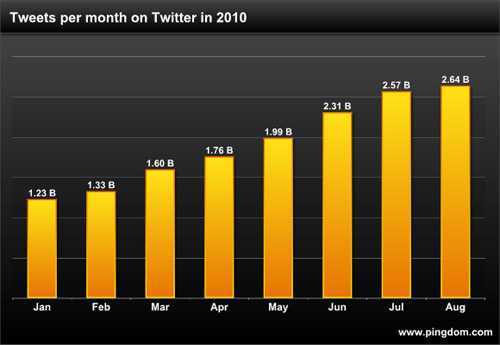 It should be interesting to see if Twitter’s rate of growth drops off as everybody returns to the usual grind, setting aside frivolous things.  Or perhaps it’ll pick up as people tell all their friends and coworkers about the fun social network/indispensable tool.