A post on the Twitter Engineering blog explained the unexpected development by stating, “Last week, we launched a replacement for our Ruby-on-Rails front-end: a Java server we call Blender.  We are pleased to announce that this change has produced a 3x drop in search latencies . . .”  You can see the change for yourself in the chart below. 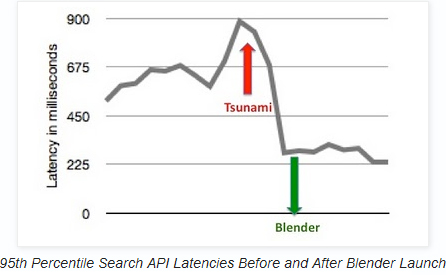 Increased search speed isn’t supposed to be the only result of this change, however.  Without getting specific, the blog post indicated that the Blender upgrade “will enable us to rapidly iterate on search features in the coming months,” which sounds promising enough.

Then, although this may not be of much interest to the average Twitter user, investors and dedicated fans are sure to appreciate that Twitter engineers believe the change will reduce the company’s server costs by quite a bit (“an order-of-magnitude,” according to the post).

That’s an interesting pack of declarations coming from the organization that made the fail whale famous.  It’s of course no secret that Twitter went a long time without even trying to earn revenue, as well.

So – although perhaps we shouldn’t draw too many conclusions based on a search upgrade – Twitter appears to be growing up.  And assuming that inference isn’t incorrect, it should be interesting to see how the company handles the next steps in the process.