Twitter’s at last found someone to be its chief financial officer, and the man appears to be more than qualified for the position.  Ali Rowghani actually comes to Twitter from Pixar, where he also held the title of CFO.

Pixar is, of course, the popular animation studio responsible for movies like Toy Story, The Incredibles, and WALL-E.  Disney bought it in 2006 for $7.4 billion, and Rowghani was present at the time, having started at Pixar in 2001.

Now, we’ll get to see what he can do with one of the Web’s more fashionable social sites.  But it’s important to note that the company’s COO has said Twitter’s not going public this year, and it’s also been a while since there have been any rumors concerning acquisitions.

Then here’s one other interesting point: Rowghani might not be Twitter’s biggest fan, since as the screenshot below shows, he’s not what anyone would call a heavy user. 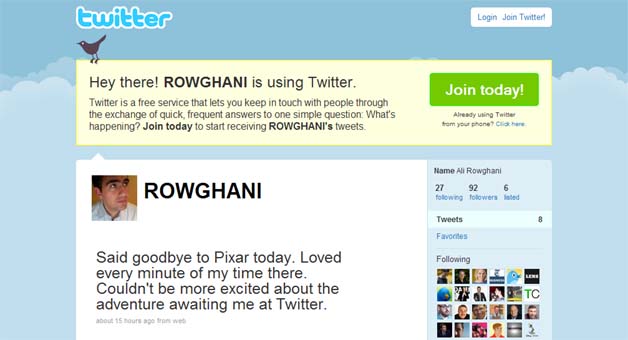 Anyway, Rowghani should officially join Twitter in March, according to Reuters, and CEO Evan Williams said that they’re all concentrating on "creating value for our users and capturing the financial opportunities that result from it."