Twitter Provides Election Info In a Variety of Ways

Twitter is pointing to some key accounts to follow to keep up with the conversation around the elections today. You can follow the Democrats, Republicans, Tea Party, or Libertarians. The company is also pointing to some lists compiled by CSPAN of House, Senate,and gubernatorial candidates.

Twitter’s @twittermedia team is working with news outlets to integrate Tweets into their election coverage, which will also be integrated with Twitter itself. The Washington Post is sponsoring a Promoted Trend on Twitter. The New York Times is incorporating its reporters’ tweets into election coverage and has a visualization of tweets to and from the candidates. CNN is analyzing tweets, trying to "understand the public’s thoughts about the elections, and MSNBC will have a livestream (starting at 9PM) that can be viewed from Twitter’s details pane if you follow one of its accounts. 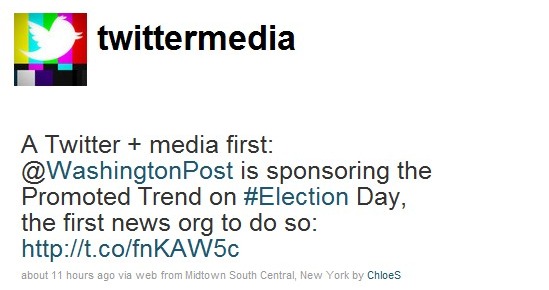 Twitter is encouraging the use of a few special hashtags. The company asks users to include #votereport with tweets about experiences at polling places. These tweets will be aggregated at TwitterVoteReport.com. Users in New York City are asked to use #NYCvotes. Finally, after you cast your vote, use #ivoted. This is just to catch people’s attention and remind them to vote.

See how you can keep up with the elections with Facebook and Google here and here respectively.

Social media has obviously changed the way in which we consume information, and that is very evident during elections, when we have all of these tools available to keep up with as much election-related info as we want, in as much detail as we want it. It’s also changed politics in general, read this for some thoughts from  Mark Penn, former Chief Messaging Architect for President Clinton and Karen Hughes, former Chief Messaging Architect for President Bush.