Finding the Balance Between Personal and Professional on Twitter

I had the pleasure of being a guest at the Bliss PR Agency in New York City this week and the staff loaded me up with questions. Here was a particularly interesting one:

What is the proper balance between personal and professional outreach on Twitter? If I am using my account to promote company and client content, is it also appropriate to carry on conversations on a personal level about sports, a great recipe or my favorite charity?

This is a great question and one that I have to address on two levels, philosophical and practical.

At its heart, Twitter is a business networking tool … which is what many companies and individuals don’t understand. They view the platform as just another way to broadcast company press releases. By trying to force-fit old “broadcast” media thinking into this new platform they are sub-optimizing Twitter at best and hurting their brand at worst.
Think of yourself in another networking situation … say an industry conference or a chamber of commerce meeting. Would you stand there and read press releases? No, of course not. You would seek out great people to connect with, discuss subjects that are interesting to you and them, and look for ways to work together. Twitter can work exactly the same way.

So even if you are playing a business “role” on Twitter, there is no reason you can’t be yourself, unless you are a naturally mean and sucky person.  If you are in that category, you either have to not be mean and sucky or not use Twitter. And if you are truly, chronically mean and sucky, you will probably will fail at business any way, let alone Twitter, so it’s better that you find out sooner than later I suppose.

When networking, the most powerful relationships are built on trust and friendship, so it’s OK to let people know a little bit more about what is going on in your life, including your love of sports, charity, and family.  As you go throughout your day, just tweet what is interesting to you, as long it is appropriate and professional.

In most cases, I don’t think it makes sense to have both a personal and business account. You’re not two people and being yourself is not only a great way to build your business network, it humanizes your company brand.

Somebody told me yesterday: “I just do NOT follow a company logo account on Twitter. Why would I?”  I think that sums up the sentiment for many.
Now let’s look at practical realities. Even if you have this concept down, maybe your company doesn’t. If your job is to be your official company Twitterer, you may have marching orders to follow a role or social media policy that has you tweeting behind a logo. Here’s what you should do in that case: follow the company policy. Don’t lose your job over Twitter. You can still work to change attitudes over time.

There are several compromises or hybrid strategies to blending personal and professional approaches on Twitter: 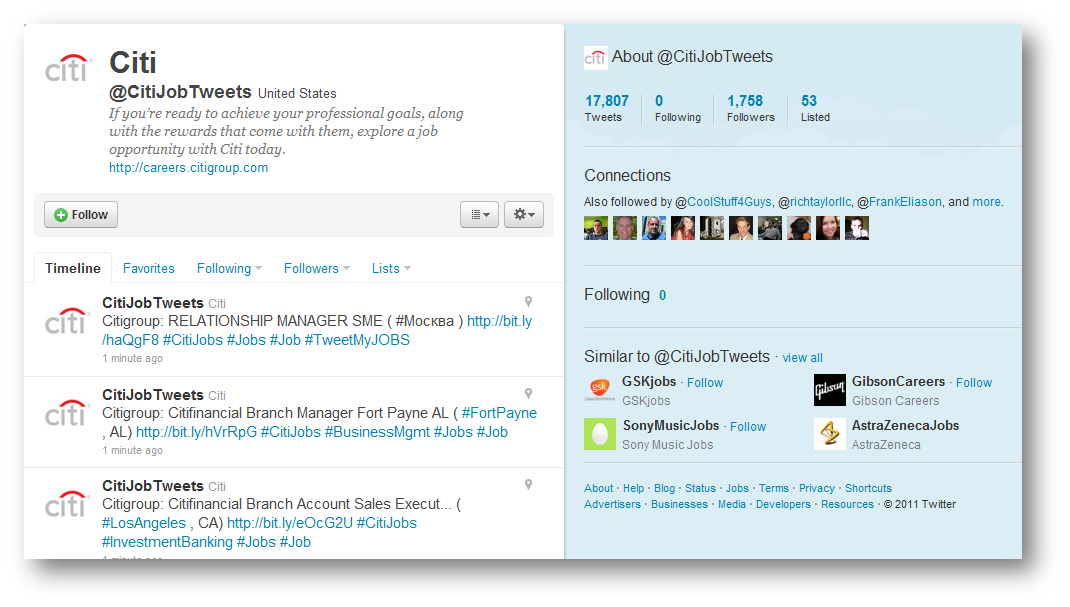 All business all the time. In some cases it is entirely appropriate to “broadcast” over Twitter. Here’s an example: Citi has a site that only broadcasts job openings. They really don’t need to engage in a conversation and they’re not even trying. Notice that they follow nobody. They have jobs, people want them … and they subscribe to the account.  It’s that simple. They could probably work to build a community, but why? 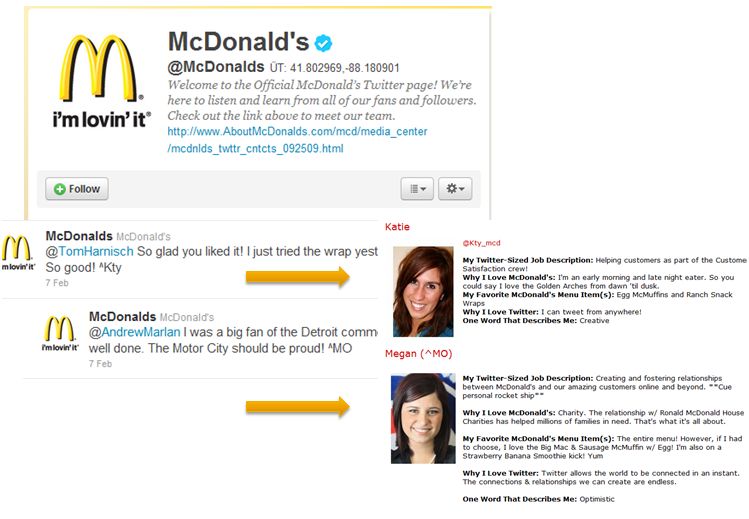 Tweeting under cover – Many of the world’s most important brands have teams of tweeters engaging with the public behind a corporate logo. Like this example from McDonald’s Twitter account, the initials of the tweeter show up at the end of each tweet and following a link in the Twitter bio leads you back to profiles of the individuals providing the tweets. Certainly a great option to humanize the brand and still operate under one brand banner. 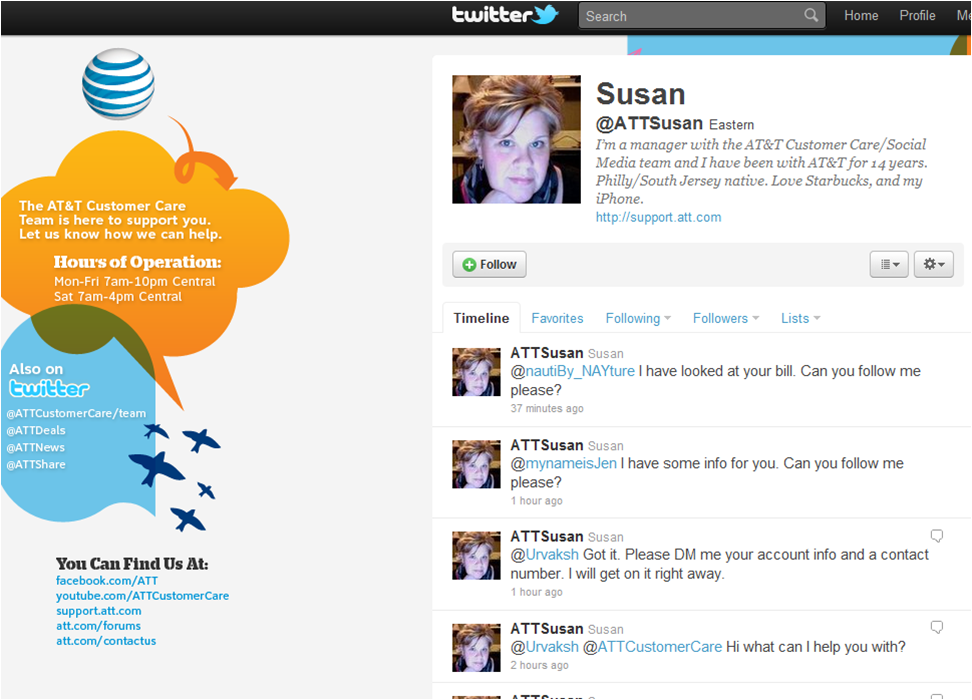 Blending personal/corporate — In some cases there are corporate accounts assigned to individuals. When that person moves on, the profile is still owned by the company. One example of this is @sharpiesusan who tweets on behalf of Sharpie pens. Susan has built up a faithful following but when she moves on to another job someday, this brand equity will stay with the parent company Newwell-Rubbermaid and Susan will simply be replaced.

This also works well in a customer service situation. In the example above, ATT has accounts set up for the representatives that can be moved over to other representatives as they change and take on new roles.

So those are a few examples and best practices but I’m sure there are many more. What challenges are you facing blending personal and professional content on Twitter?

Video Chat Between iOS and Android, Courtesy of Qik and Skype