Last fall, Twitter started including geolocation information in its API, but it was not available through Twitter.com. That appears to be in the process of changing now.

This week, Twitter has been rolling out (it appears to still be in the process) geolocation info on tweets at Twitter.com. Various reports from users have been circulating, with those who have access to the feature pointing to a little blue icon by the tweet source on individual tweets, which when clicked, shows location information on a Map (powered by Google Maps). 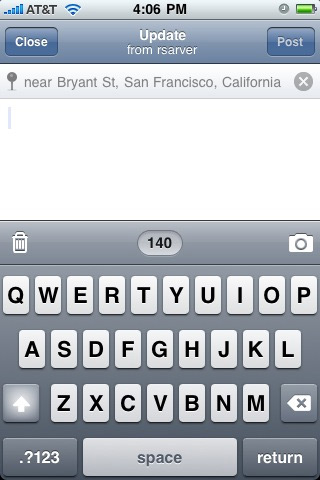 The feature (as most new Twitter features do) is already receiving some criticism from users who have access to it. For example, Kim-Mai Cutler with VentureBeat says Twitter’s geotagging is "far from what Twitter needs to be a real player in location."

Cutler adds, "First, the new maps feature isn’t turned on for Twitter’s search results. The whole point of location-based search is to be able to find what’s actually happening around you right now. Instead, Twitter tosses a few such tweets into a wash of noise…"

Earlier this week, news of Facebook readying location features surfaced. The company is expected to launch something along these lines at its f8 conference in May. Location players getting the most buzz currently are Gowalla and Foursquare. They you have Google, of course. This may be the most interesting space to watch as the year progresses. It will be quite interesting to see how mainstream location sharing becomes when it comes to consumers.

Are you seeing the geolocation information showing up at Twitter.com? Do you intend to share your location when tweeting?