Update: It turns out that the shout out account is just an internal one for Twitter employees. Twitter gave The Next Web a statement saying, "W we can say is that it’s not a product. It’s an internal account where Twitter employees ‘give props’ to each other. " They didn’t acknowledge the TwitterOnNotice account, but it’s likely an internal deal as well.

Original Article: It appears that Twitter may soon reveal yet another way to suggest users for other users to follow. This time it would come in the form of an actual Twitter account. It has been discovered that there is an account called @twittershoutout, which has not been confirmed by Twitter as being a new product, but was most likely created by the company.

As pointed out by The Next Web, only Twitter itself can apparently create accounts that contain Twitter in their names, which would mean that this must be an official account.

The bio for the account simply says, "Contribute your shoutouts to peeps." This would seem to imply the account would be used as kind of an official "Follow Friday"-type vehicle. Recommendations for interesting people to follow. What remains to be seen is how these recommendations will be reached. Just handpicked by Twitter? Based on something like the resonance algorithm used in Promoted Tweets? I expect we’ll hear more on this from Twitter before too long. 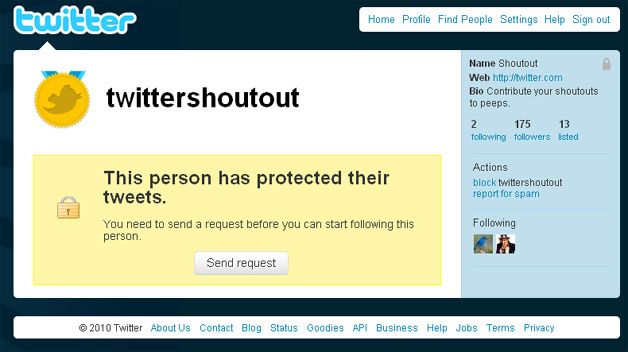 Last week, Twitter launched some new user discovery features, aimed at making Twitter more useful to people on a more personalized basis. This appears to simply be another step in that direction.