They may not outsell the iPhone or the most popular Android model, but the initial reviews of Windows Phone 7 devices have been pretty positive.  This afternoon, Windows Phone 7 received another compliment, too, as Twitter for Windows Phone was released.

The launch itself is praise of a sort; accurately or not, Twitter could have dismissed Microsoft’s offering as poorly designed or irrelevant in terms of probable user base.

What’s more, within the text of a blog post announcing the release was even clearer flattery: "We want you to be able to get Tweets quickly and easily, no matter what device you’re using, and the clean design of the Windows Phone platform is particularly great for this."

Anyway, with regards to some other details, the post stated, "Twitter for Windows Phone includes all of the features that you’d expect from Twitter – your timeline, suggested users, messages, lists, and a great way to explore Twitter without even logging in.  You can sign up for an account right from the app as well." 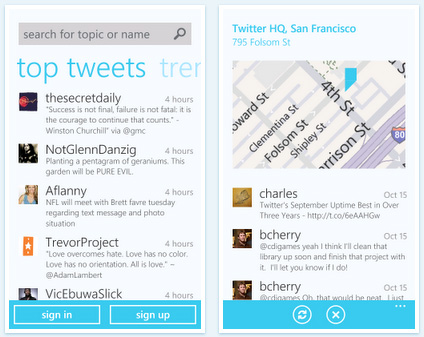 Plus there’s a "Pivots" function that allows for swiping from a timeline to mentions to direct messages.

Microsoft, along with Windows Phone 7 users, should be pleased with how this all turned out.

Facebook Creates Individual Pages About You and Your Friends