At the moment, a Trending Topic on Twitter if you’re not signed in is #seharrypotterfossebrasileiro, which highlights two problems.  First, the average person may not be interested in Brazil’s fondness for Harry Potter.  Second, even if he or she is, the average person definitely doesn’t know Portuguese, the official language of Brazil.  So Twitter’s rolling out translations and more local trends

The translations feature probably represents the more ambitious move.  With it, Twitter may be able to break down barriers between users in different countries and help people connect.  Or at least help them get a grasp of developing news stories and/or different pop music scenes.

What’s more, the translations feature brings a certain search giant into the equation.  A post on the Twitter Blog explained, "We are now using Google Translate to display Tweet translations in the details pane to give people more access to what people are talking about around the world." 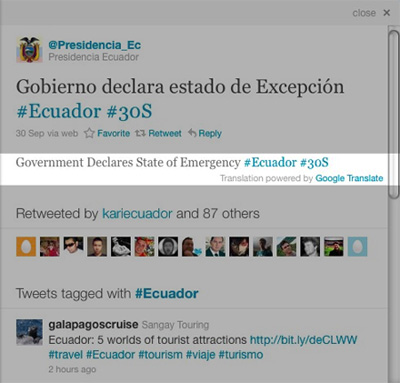 As for the matter of local trends, the post added, "Trending Topics is in high demand from folks in cities that aren’t yet on the list, so today, we’re expanding local trends to include 13 new countries and 6 new cities.  These new locations include some of our fastest growing markets."

Count on more additions to come.