Twitter announced today that its launching the anticipated Promoted Accounts feature. The company is also making its Promoted Products (which also include Promoted Tweeets and Promoted Trends) available through partners.

Promoted Accounts are being launched as part of Twitter’s "Suggestions for You".

"Promoted Accounts are suggested based on a user’s public list of whom they follow," explains Twitter’s Carolyn Penner. "When an advertiser promotes an account, Twitter’s algorithm looks at that account’s followers and determines other accounts that those users tend to follow. If a user follows some of those 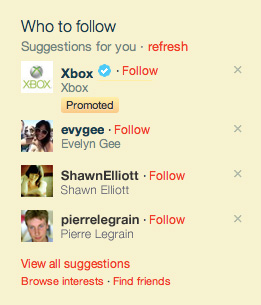 Users will start seeing promoted suggestions this week. However, Twitter will only be testing Promoted Accounts with a handful of companies at first (including HootSuite). The initial partners will run Promoted Tweets in search and highlight Promoted Trends.

"Along with these more noticeable changes, we made additional tweaks to our Promoted Products suite last Friday," notes Penner. "We bumped up the Promoted Trend to the top of the trending topics list because we’ve been pleased with the quality of Promoted Trends and people are finding them useful. And you may have noticed that if you click on a Tweet with a hashtag that a brand is promoting, you will see a Promoted Tweet among the related Tweets in the details pane."

By the way, Twitter CEO Evan Williams just stepped down.