A process that began about six weeks ago has now reached its conclusion.  Twitter for iPhone and iPod Touch, an app that was known as Tweetie until Twitter acquired it on April 9th, was (re)released today, and as promised, it’s free and doesn’t take direct aim at third-party developers. 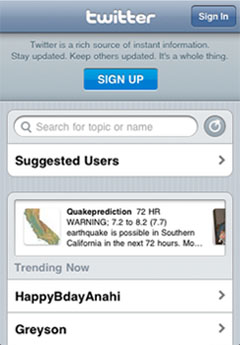 The concern was that Twitter might label this app "official" – much as it had labeled a BlackBerry app in the same fashion – and thus draw all the attention away from competing apps.  Twitter stopped calling its BlackBerry app "official" a while ago, though, and hasn’t used the word again here.

Indeed, rather than steal developers’ customers, it looks like Twitter’s trying to appeal to people who have never used the site at all.  A post on the Twitter Blog explained, "Something worth noting is that you don’t need a Twitter account to enjoy this application.  Browsing trends, reading Top Tweets, finding popular users, and checking out public tweets geographically nearby are all possible immediately upon download.  Discovery and consumption of interesting, relevant information is a central focus."

The post then continued, "However, quick and easy signup exists within the application so new users won’t need to visit our web site to create an account."

Initial reactions to the reborn app have been positive.  Twitter seems to have succeeded in satisfying potential users while not alienating its developer community.