If you’re not familiar with Justin Bieber (you’re excused if you’re not a 12-year-old girl), he is 16-year -old singer, who was discovered by his manager on YouTube, apparently after his mom uploaded videos of his performances so his loved ones could see them.

Do you think Justin Bieber’s Twitter success is a product of or a contributor to his popularity? Both? Share your thoughts. 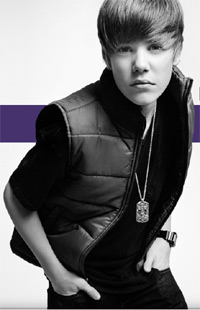 According to What the Trend, Justin Bieber is popular right now because, he "has a lot of fans who like to tweet about him," and his new album was just released. It has to be more than that though. Bieber has frequently been a trending topic for over a month straight. The tweets just keep pouring in, and they’re generally not spammy.

The week of Valentine’s Day, What the Trend said, "the young Canadian R&B/pop singer has a lot of fans who like to tweet about him! He is trending these days because his solo begins the new version of We Are the World, a song for the relief efforts in Haiti."

The next week, it was attributed to the same thing. The week after that, it was: "the young Canadian R&B/pop singer is trending these days because his new song, ‘Never Let You Go’ was released for download on iTunes this week, as well as a duet with Sean Kingston, an appearance on Jimmy Kimmel Live. He also had his birthday March 1st."

(Hat tip to Mashable for keeping an archive of top ten tweets each week).

"It’s pretty crazy to think about and just to have all the fans’ support," Bieber said of his Twitter status in a recent interview. "Everything’s just been wonderful."

So, Bieber has had a busy month. Still, the sheer domination over trending topics that has grown from these happenings has been quite remarkable. Have the Twitter stars just aligned for Bieber or is it all part of the marketing?  Either way,  perhaps there are lessons here that marketers could take away from Bieber’s spark of Twitter interest.

It’s tough for a brand to achieve the fandom of a teen idol (though the good news for brands is that they probably have a better shot at their own fandom lasting for the long run, as teen idols for the most part come and go, despite a few exceptions). Twitter is about what’s happening right now, though, and pop culture is ALWAYS happening right now. 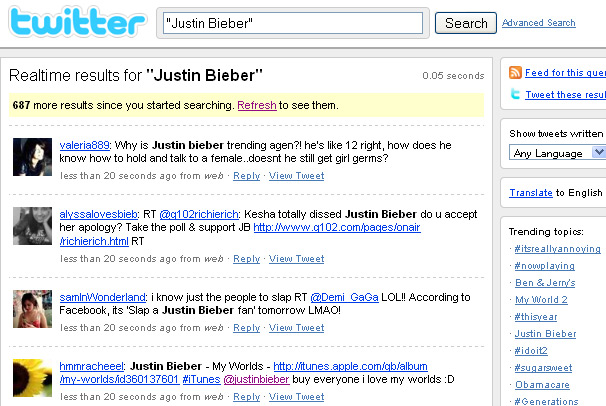 Lessons to Learn from Justin Bieber

1. A stream of Justin Bieiber Twitter mentions appears on the Justin Bieber site. Any site can do this, and it helps promote your Twitter presence. However, use caution, because you can’t control what people are saying about you. If you’re ok with that openness, let it show, but if you take care of your customers, chances are they won’t have much negative to say about you anyway.

2. Stay relevant to pop culture. Does that mean go and crank out a bunch of Justin Bieber articles? No, but it may help to show that you are "hip" to what’s going on in some capacity.

3. Perhaps it is hasty to assume, but in this case, I’m fairly comfortable with going out on a limb and assuming that a good percentage of Bieber’s fan-base is made up of young people. If there’s any truth to that, it would appear to mean that Twitter is being more widely adopted by younger generations than previously thought. This could be helpful to keep in mind when considering your potential Twitter audience.

4. Stay relevant not only to pop culture, but to customers. Much of Bieber’s Twitter popularity has been attributed to the various things he has been working on – appearances in songs, TV performances, new singles, an upcoming album, etc. He’s doing things that his fans find interesting and worth tweeting about. Do things that your fans find interesting, and they will hopefully tweet about it.

Is it ok to say no to Twitter? Sure, but you can’t deny the potential reach the service allows you, and this is only growing. A year from now, Twitter is likely going to be even more useful to businesses in a variety of capacities. They’re expected to have an ad platform, for one. Last week, they announced the @anywhere platform.

Don’t expect to get Justin Bieber-like fandom, but I’d wager that many businesses would consider a fraction of that to be a successful Twitter endeavor. By the way, a recent study found that brands on Facebook and Twitter are favored by consumers.

Why do you think Justin Bieber has dominated Twitter’s trending topics so much more than other celebrities and topics? Discuss here.