Twitter has just announced on their blog that they are in the process of rolling out the new web interface for mobile devices. For those who access the service through twitter.com on their mobile browsers instead of through an iPhone or Android app, this is good news.

It’s good news because the old twitter.com mobile site was a bit clunky. For example, in order to access search or to get to your own profile, you had to scroll down to the bottom of your timeline.

The app is fast – you can quickly scroll through your timeline, move between tabs and compose Tweets. It’s rich – it takes advantage of capabilities that high-end device browsers offer, such as touch gestures and a large screen. And it’s simple – it’s easy-to-use and has the features you’d expect from a Twitter application, including your timeline, @mentions, messages that you can read in conversation view, search, trending topics, lists, and more. 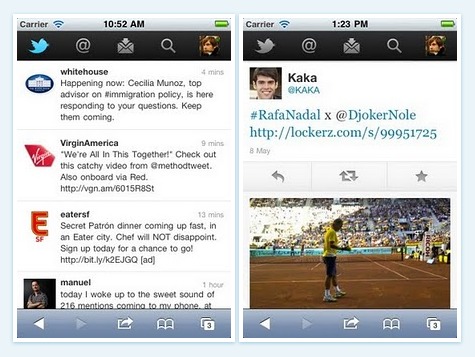 The redesign looks strikingly similar to the official Twitter app for iPhone, just inverted. The toolbar with links to the timeline, @mentions, messages, search and profile has been moved to the top of the screen.

The new web app is rolling out for some users today on iPhone and Android. Many will have to wait as they will launch it for everyone in the next couple of weeks. If you are a twitter.com user on your smartphone and are unlucky enough not to have the new app yet, Twitter would like to remind you that you can still use the existing version of twitter.com (duh).

Comcast Blocking Pirate Bay? (No, According to Comcast)

May 12, 2011
Recent Posts
Registration is disabled.