"And Facebook has over 400 million active users worldwide, each with about 130 ‘friends’. Imagine the impact on campaign results if every recipient shared a message with 130 friends, and so on and so on! The best part is that there’s no added cost to include social media sharing, so it’s pure ROI." 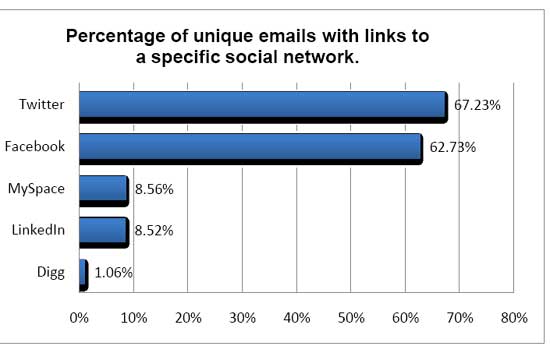 *Twitter was the most popular social sharing option, included in 67.2 percent of all social emails, trailed closely by Facebook at 62.7 percent.

*Emails shared on Twitter returned CTRs of 10.20 percent − over 40 percent higher than messages not linked to any social media.

"I truly believe that if your messages are relevant, timely, and interesting, and you include social sharing icons in your messages, your audience will gladly help your brand message ripple across the Internet," said Grabowski.