Twitter’s efforts to generate ad revenue will kick into high gear this year and be quite successful, according to a new report.  eMarketer estimates the company will earn $150 million in 2011, up more than 333 percent from the $45 million it may have earned in 2010.

Obviously, that would represent a huge increase.  Then eMarketer thinks Twitter will achieve a repeat performance of sorts in 2012, upping its ad revenue by about $100 million again to $250 million. 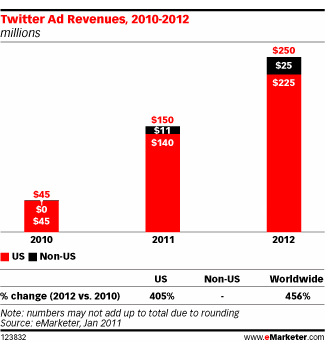 To put that into perspective, eMarketer’s report tossed another couple social networking sites into the equation.  "Twitter revenues will still be small compared to those of Facebook, but by next year eMarketer expects Twitter to pull in more ad dollars than Myspace," the report stated.

Debra Aho Williamson, a principal analyst, also reasoned, "If Twitter can grow its user base and convince marketers of its value as a go-to secondary player to Facebook, it will succeed in gaining revenue.  In 2011 it must work overtime to give its early advertisers a positive experience."

So this next year or two could be a very exciting – and profitable – time for Twitter as long as things stay on track.

New-ish CEO Dick Costolo is almost sure to spend a lot of time courting advertisers to guarantee that’s the case.

Should Google Increase its 20% Time?