Life is good – and rather Twitter-centric – for Joe Lauer and Kristin Kanaar.  Not only did they get to see Twitter hero Conan O’Brien perform last night, but today, Twitter announced that it’s acquired their messaging infrastructure company, Cloudhopper.

The Twitter-Cloudhopper relationship apparently goes back quite a ways.  Kevin Thau, Twitter’s director of mobile business development, explained on the Twitter Blog this afternoon that they’ve been working together for about eight months.

As for what, precisely, everyone’s been up to all this time, Thau wrote that Cloudhopper "enables Twitter to connect directly to mobile carrier networks in countries all over the planet."  And, post-acquisition, Cloudhopper is supposed to "help us further grow and scale our SMS service." 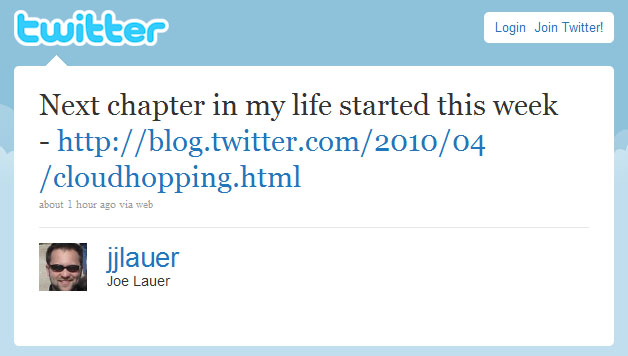 Not many other details are available at this point.  Terms of the purchase weren’t disclosed, and no one’s discussed specific projects or growth goals.  (Thau just said Twitter’s currently processing close to one billion SMS tweets per month.)

Cloudhopper’s site states that it was founded in 2008 by Lauer, at least, and a little LinkedIn research shows that both Lauer and Kanaar used to work for one other organization – an SMS aggregator that’s been called both Simplewire and OpenMarket at different times in its history.