TomTom, the Dutch personal navigation company with the fun to say name, has announced today via press release a new site with live traffic data for the masses to access – for free.

Possibly feeling their market encroached upon by the likes of Google and their Maps Navigation for Android, the site will allow anyone in the world to access up-to-the-minute traffic information in their area.  That is assuming you live in one of seventeen European countries or South Africa.  Sadly the new site, however accessible it is to those in the States, only contains real time traffic data for 18 countries.

TomTom released what they called a “Traffic Manifesto” last year which stated that they were “on a mission to reduce traffic congestion for all.”  Around that time they debuted their newest traffic scouting technology, what they called HD Traffic 4.0.  They touted it as the best available saying, “TomTom’s real-time and predictive traffic technology now detects traffic jams that other services are unable to. HD Traffic 4.0 reports traffic jams with higher accuracy, reporting up to 200% more traffic jams during rush hours.”

The website itself looks good, not great.  It groups accidents in one area with a single icon, which you click  for further information.  Of course, you’re not getting the latest news on delays in your neighborhood, but it would help on even a moderate length trip.  Live traffic in Luxembourg looks like this: 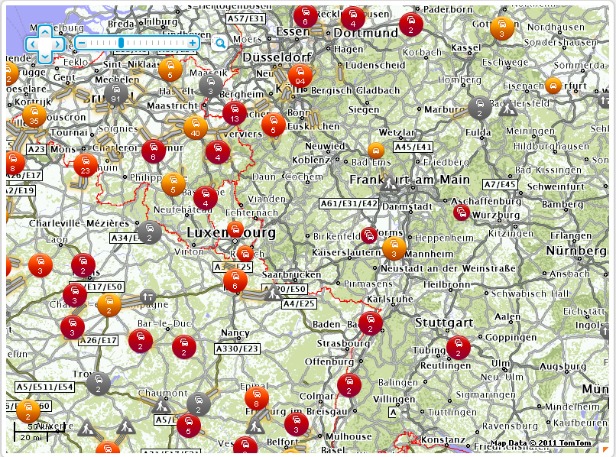 All of this sounds great, except right now it doesn’t exactly benefit many North Americans.  Checking the traffic on your computer before heading to work sounds like a worthwhile activity.  Even accessing it on a mobile device was fine for me, as it wasn’t any clunkier on the iPhone than on my computer.  Maybe TomTom will expand their live traffic service westward in the near future.