While the future of TMobile may still be undecided, at least in relation to the AT&T merger, that hasn’t prevented the company from moving forward on various projects. The latest involves bringing free Voice over IP services to Facebook, which should facilitate Facebook’s ongoing transition from social media platform to a “one-site-does-it-all” type of web portal.

The service, called Bobsled, requires the launch of TMobile’s Bobsled installer, meaning, yes, there is more software to be installed for this service to work. However, once the install is complete, users will have the capability to call people on their friends list. The service makes use of the Facebook Chat utility, and Bobsled users can leave voicemail messages for friends who aren’t available. Over at the TMobile blog, it is implicated that Bobsled application was developed to meet the growing demand for a voice chat service on Facebook. 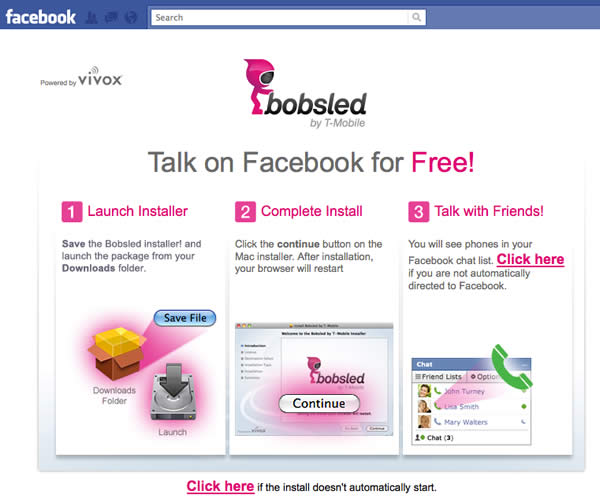 The use of the Facebook Chat environment supports this. Another benefit of the chat technology allows users to place “one-click calls” instead of having to dial a specific number. The blog entry also indicates calls from PC environment to Mac machines will also be free. Apparently, there was some question about this? Did Jobs and Gates Balmer disapprove of this capability?

While the threat of being swallowed up by AT&T is still alive, that doesn’t mean TMobile doesn’t have further plans for the Bobsled application:

In the near future, T-Mobile plans to evolve Bobsled by T-Mobile to include video chat, the ability to place VoIP calls to mobile and landline U.S. numbers, and will offer applications on smartphones and tablets across various mobile platforms, regardless of the carrier that powers such devices.

It’s hard not to wonder, however, if AT&T will allow such creativity to flourish, provided their purchase of TMobile — Why develop a working 4G network when you can buy someone else’s? — goes through.

eBay Buys WHERE to Expand in Local and Mobile