The Voice: On The Cutting Edge of Social Media Engagement

For some, the argument can be made that NBC’s new hit The Voice is a little too much like American Idol to differentiate itself and remain a true primetime player. Sure, the rules are different. Contestants are broken down into groups and given mentors, and those mentors happen to be the judges from the preliminary rounds. Sure, the beginning episodes of the show employed the back-to-the-performer gimmick, which was interesting. But at its core, it is a singing competition. With American Idol decidedly less popular than it has been in previous years, is America ready for a new singing competition?

If the ratings are the ultimate indication, then the answer is yes. What The Voice is doing differently in its initial phase that no other performance competition has done involves its commitment to social media, especially Twitter. The Voice isn’t waiting for social media buzz to find it, but rather integrating it into every aspect of the show.

The first angle of attack is the always present hashtag, #TheVoice. Uniting everyone in the Twittersphere tweeting about The Voice with a singular hastag has been a sure-fire way to get the show trending. According to a report by The Hollywood Reporter, 70% of tweets coming in about The Voice‘s first live show contained #TheVoice hashtag. That’s double the industry average for a promoted tag. The Voice has successfully built a community on Twitter who all use the same hashtag, it appears.

2 days ago via Tweetbot for iPhone · powered by @socialditto

1 day ago via TweetDeck · powered by @socialditto

How does the show promote that particular hashtag? Well, during the show it prompts viewers to tweet using the hashtag, but not all the time. One of the show’s producers told Mashable that they run the #TheVoice tag on the screen strategically, when they think the audience “would be compelled to talk about it.”

Live tweets about the show are often times displayed on the bottom of the screen during live performances as well.

The Voice‘s second angle of attack comes in the form of G4’s Alison Haislip. According to the show’s website, she is the “in-show and online correspondent” and the “direct digital connection to everything that’s going on with the show.” The Attack of the Show vet basically serves as the program’s social media guru.

23 hours ago via web · powered by @socialditto

Haislip interviews contestants and mentors in the “V-Room” on the show and also monitors the Twitter chatter going on about the performances. Like most of the members of the show, she interacts with fans on Twitter in various ways. For instance, on her blog for The Voice, Haislip has posted “Twitter’s Dream Songs for Team Adam & Team Cee-Lo.” This is the result of questions to fans posted via her Twitter account. Fans have suggested songs like Chris Isaak’s Wicked Game and Queen’s Under Pressure.

The third mode of attack is saturation. Everyone involved on The Voice is very active on Twitter. From the contestants, to Carson Daly, to all four mentors – everyone tweets about the show. Christina Aguilera didn’t even have a Twitter account before joining the show, but it was suggested to her that she get one. She is already approaching 500,000 followers. Here are some of her interactions –

@TheRealXtina
Christina AguileraLove my girls. So hard to see some go but they are all #TeamXtina for life! xo http://twitpic.com/5bp1z7

5 days ago via TweetDeck · powered by @socialditto

@TheRealXtina
Christina AguileraMy boobs are the 5th judge”;) RT @blakeshelton: “tell christina to cover up them boobs!” Hell no!!! Why the hell would I EVER do that?!!!

5 days ago via TweetDeck · powered by @socialditto

Not only are the mentors tweeting about their contestants on their own time, but they are also live-tweeting the performances as they happen. For example, Maroon 5’s Adam Levine encourages one of his performers in real time –

5 days ago via Echofon · powered by @socialditto

And The Voice celebs aren’t simply tweeting amongst each other (although there is plenty of that) but are engaging the general audience, responding to actual fans as you can see through this tweet by mentor Blake Shelton (who was the most active Twitter user before the show began) –

@blakeshelton
Blake Shelton“@ashleygirl31: im not voting for ur peeps b/c of u”
Ha! Ha! Yeah!! That’ll teach those kids!!

1 day ago via Twitter for iPhone · powered by @socialditto

@CeeLoGreen
Cee Lo GreenVote for your favorite performances on The Voice from last night by downloading on @iTunesMusic. #thevoice http://t.co/Q3TUWox

4 days ago via Mobile Web · powered by @socialditto

22 hours ago via Twitter for iPhone · powered by @socialditto

@adamlevine
Adam Levineexcited for the rest of @maroon5 to check out @NBCTheVoice on tuesday! it feels almost like a second living room.

10 hours ago via web · powered by @socialditto

@NBCTheVoice
The VoiceOh the memories of Quarter Finals Round 2 on #TheVoice. So many photo-worthy moments to say cheese and throw up the V. http://bit.ly/kx0PXz

29 minutes ago via TweetDeck · powered by @socialditto

NBC has integrated social media into the official site for The Voice as well. Each contestant, host and mentor has their own page which feature real-time feeds from both Twitter and Facebook – 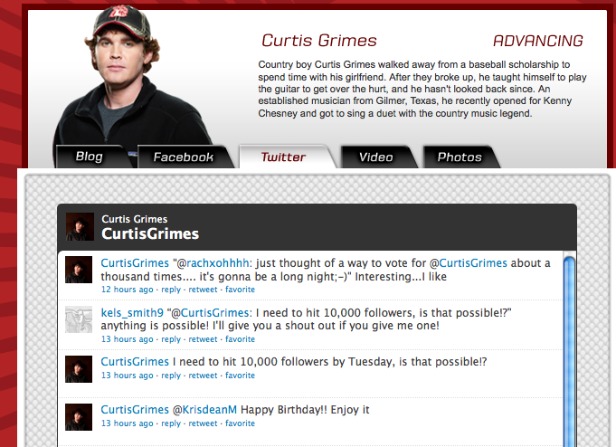 The Twitter engagement is working. During a recent episode, over 200,000 tweets rolled in about The Voice. And that’s just the volume while the show was airing. That’s not counting all the discussion that happens between the broadcasts.

Social media integration is an absolute necessity that will only get more and more important. We are going to live in a world where there will be two ways to experience TV: on your own schedule or with real-time engagement. I think Twitter is helping return us to that shared viewing experience. It’s bringing all that richness out of the platform.

Is Twitter engagement the future of live TV? Let us know what you think.