What’s really amazing, however, is how much attention Aboukhadijeh has generated about YouTube Instant. This is today’s viral Internet in action, in a display you just couldn’t have seen in the pre-Twitter era. Last night, Feross tweeted that YouTube Instant had received 270,000 visitors in 3 days.

It’s been the subject of somewhere in the ballpark of 375 tweets just in the past three hours leading up to this writing, and it’s received this kind of Twitter love consistently since it launched.

None of this is to say that Twitter is the only reason YouTube Instant has become a viral hit, though there’s no doubt Twitter has played a crucial role. YouTube Instant made Google Trends over the weekend, and its received a fair amount of media coverage. Aboukhadijeh has a list of publications who have covered YouTube Instant, which includes WebProNews, TechCrunch, Mashable, ReadWriteWeb, Fast Company, Engadget, and even big mainstream publications like the New York Times and Washington Post. 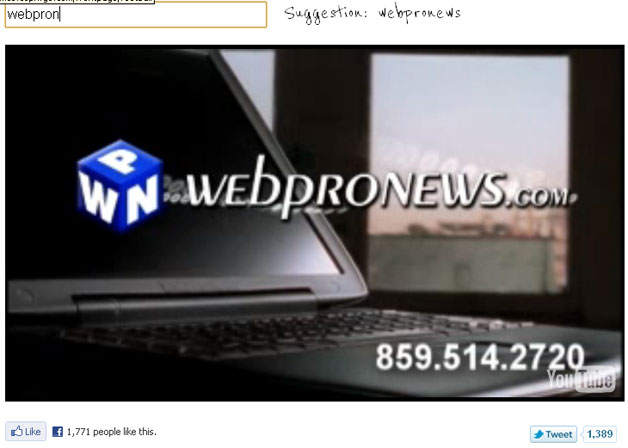 It’s interesting to see the nature of the viral web in action and how social media and blogs/news publications feed each other. Enough tweets, and it must be storyworthy. Enough stories written about it, and it must be tweetworthy.

It’s funny to think that the whole thing started from a bet between roommates and 3 hours of work. "It started out as a bet with my roommate, Jake Becker. I bet him I could build real-time YouTube search in less than an hour," says Aboukhadijeh on his blog. "Sadly, I lost the bet – It took me 3 hours to finish it, and another couple hours to polish the user interface into what you see now at YTInstant.com. But, I’m happy with the result."

Clearly a lot of other people are happy with it too.

"Needless to say, YouTube Instant has gone viral," says Aboukhadijeh. "Without pausing to worry about what caused this magical event to transpire, I set about upgrading my under-powered server to a much beefier configuration capable of handling the Slashdot effect. For most of Friday morning, my server was visibly struggling to serve the flood of web traffic."

As for YouTube Instant itself, he says he’s working to make it more full featured. It’s unclear whether or not he’ll actually be working for Google (we’re waiting for a response about that), but he’s no doubt doing plenty to drive YouTube views.