Sometimes, when pop culture history meets Twitter, they fall in love. Since they love each other very much, they decide to show that love by making a novelty account. Some novelty accounts fail, and some succeed. This new novelty account is a winner.

Last Wednesday, a Twitter account was created for T-800, Cyberdine Systems Model 101, better known as The Terminator. Using the handle @111001001101010, the T-800 has begun its quest to find Sarah Connor. So far, The Terminator has asked about 70 different “Sarahs” on Twitter whether of not they are Sarah Connor.

If you need a refresher on why this is funny, please visit the Terminator Wiki.

The account in the above pic, T-800, doesn’t exist. It seems as though some people on the web saw this pic and though that it was a screencap from a real Twitter feed. At least one person, the creator of @111001001101010, saw the opportunity to capitalize on the idea and created an account that is actually trolling random girls named Sarah out in the Twitterverse.

3 days ago via web · powered by @socialditto

3 days ago via web · powered by @socialditto

6 minutes ago via web · powered by @socialditto

The “what if certain things occurred on social media” joke isn’t a new one, but it is still pretty damn funny. You remember the CoolMaterial post about famous historical events playing out on Facebook, right? It became one of the most viral pics is recent memory. Here’s a section of it – 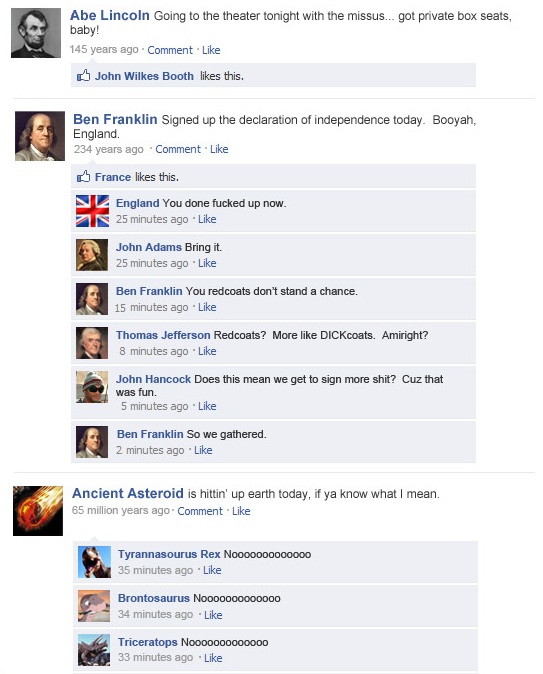 Personally, my Twitter experience is greatly enhanced by following a couple of novelty accounts. To have an enjoyable Twitter stream, you need to achieve the right balance of important stuff and playful stuff. It’s nice to break up a stream filled with news updates and politics with a funny tweet from Batman. Here are a couple of novelty accounts that make Twitter more enjoyable (Most are NSFW) –

@TheTweetOfGod
God“Thank You Lord” is trending. It trends a lot. Funny how “You’re Welcome Humanity” never does.

50 minutes ago via web · powered by @socialditto

@God_Damn_Batman
The BatmanYes, I have AAA. But only to see the look on the tow guy’s face when I tell him I need help changing a flat on the Tumbler.

3 days ago via Batcomputer · powered by @socialditto

@PimpBillClinton
Bill ClintonWhen I was president, the only royalty I had any respect for was the Burger King.

What are your favorite novelty accounts on Twitter? Let us know in the comments.

Android Up to 150 Million Devices Activated

Does Everybody Own a Mobile Phone?