Over the past month or so there’s been an escalating amount of hype and discussion about Q&A startup Quora in the tech world. As a quick background, Quora was founded last year by former Facebook executives/engineers Adam D’Angelo and Charlie Cheever. It raised a nice round of venture capital at a really high valuation for a company that had yet to launch.

Quora seemed to quickly live up to the hype though as the site launched into a private beta where it’s buzz began to build among Silicon Valley’s entrepreneurs, startup employees, investors, and journalists.

I joined during this time period and immediately became hooked on participating in the Q&A discussions happening in some of my favorite topics that mostly hit well with Quora’s initial tech/business heavy userbase.

The momentum has continued as Quora opened up, and the hype has gotten large with lots of coverage from blogs like Techcrunch to go along with proclamations from tech influencers like Robert Scoble being enamored with it, investor Shervin Pishevar saying it’s the “future of blogging”, and VC Mark Suster proclaiming it to be worth the high valuation it was given. 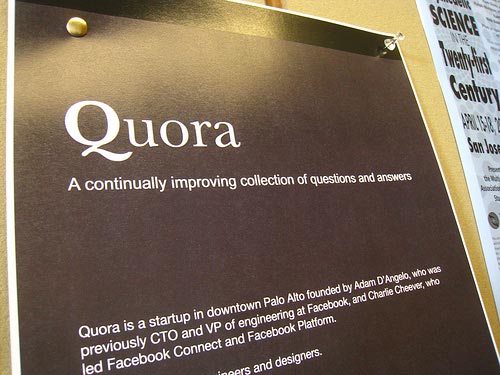 Like anything receiving a lot of praise, there of course has to be detractors. The comments on most of the Techcrunch articles are filled with people who bash Quora and say it’s overhyped, and now there are articles appearing that also question whether Quora can avoid the fate of Yahoo! Answers and other QA sites which have turned into “low quality sites” once they get big.

Overall this debate is kind of interesting and fun to predict the future of a promising startup, but it’s also kind of silly. Let me explain why…

First of all, it’s kind of humorous that people are pitching Yahoo! Answers as a worst-case scenario for Quora. That already shows that Quora has high hopes as Yahoo! Answers is one of the largest sites on the web. While the quality of questions there can be poor, there’s no denying that it’s gigantic. Many, many startups would kill to have that much traffic.

Second, much of the debate assumes that Quora “wants to be the next Facebook or Twitter”. I’m not even sure what means. Does that mean a “big social company”? If we want to be that vague, then yes, Quora probably would like to be that, but it doesn’t have to be that much like those services to succeed, or even be close to as successful.

If you read Quora’s About page, Wikipedia is really the most likely comparison for what Quora hopes to become or beat. There are obvious differences being that Quora is not a nonprofit, and it’s starting much later in the life of the web which gives Wikipedia a tremendously large head start.

However, Quora also has some advantages of starting today and building a “knowledge product” that is built to be social from the ground up, designed better, and a more engaging and participatory experience for a larger number of people. From what I’ve heard, Wikipedia has only a few thousand users who actually edit. It seems possible that Quora could beat that number simply from being a more engaging and social tool.

Quora can also think from the start about how to handle spam, fake user accounts, and many of the problems people are predicting they will have as the service grows. It’s naive to think that Quora hasn’t been aware of those problems and thinking about them from the start.

I’m even speculating though on what Quora wants to become. Most of them change dramatically over time, so Quora might end up to be another complete social network with photo and video sharing for all we know at this point.

Let’s give Quora some breathing room to grow up a little bit and see what they grow into. My bet is that it will continue to be quite good and interesting.

Let the debate rage on.

How Skype Can Be a Useful Tool for Content Creators