“The kind of historic event that only happens once in a generation – the storybook marriage between an anachronistic fascination with the descendants of some very lucky German hemophiliacs and ubiquitous 21st century media hypercoverage.” – Jon Stewart, 4/25/11

If you are an American and want to hear less about the upcoming Royal Wedding, then it might be better for you to go to the U.K.  Seriously.  Apparently their media coverage of the event is not as aggressive as it is here in the States.

That’s right, according to a post on the Nielsen blog,  the American news media is covering the Royal Wedding at a higher clip than the Brits.  Since the November 2010 engagement announcement, royal wedding coverage has totaled about .3% of all American news.  This share from traditional media sources is higher than the shares in the U.K. and Australia, combined.

Now, this statistic isn’t shocking to anyone who frequently watches CNN or other major news outlets here in the States.  Watching many stations, I can’t help but feel like they have decided that the real news is simply too depressing and bleak, so they’re just going to go with fancy British wedding stuff instead.  Sounds like a plan.

This Nielsen report also includes traditional media online sources from newspapers and magazines.  They studied “buzz factor” from social media outlets as well and found this:

The study of buzz on social media (blogs, message boards/groups) and traditional media finds that while the United Kingdom creates the greater overall level of consumer buzz about the Royal Wedding, the United States has the highest share of news coverage by traditional news sources, such as the online versions of newspapers and magazines.

Here is this info in fun convenient graph form: 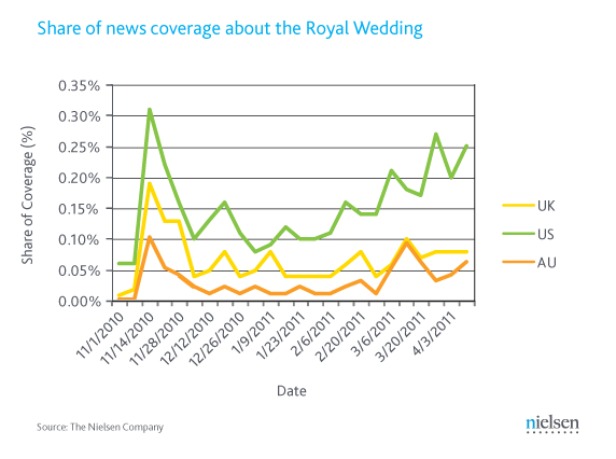 The Royal Wedding fever has led to popular websites providing special content and unique pages dedicated entirely to the event.  Earlier this month Yahoo launched a Royal Wedding site with photo galleries, streaming video and a guestbook.  YouTube also announced that they will we streaming the entire event live from their official Royal Wedding channel.  It looks like America has a fever, and the only prescription is more coverage of British socialites.  Or a Kardashian could do something drastic.  That might shift the news cycles.

Now this isn’t to say that Royal fans in the U.K. aren’t crazy about the wedding.  Remember that thing I said earlier about “Buzz factor?”  Yeah, how’s this for buzz:

@BritishMonarchy is now officially on Twitter as well, and it is tweeting about the upcoming wedding.  It currently has over 130,000 followers.

@BritishMonarchy
TheBritishMonarchyhttp://www.youtube.com/watch?v=-8msHZ8wI7Y The Archbishop of Canterbury on the Royal Wedding, speaking in a film produced by Lambeth Palace.

1 day ago via Royal Household · powered by @socialditto

The Royal Wedding is set for this Friday, April 29th.

PlayStation Network Still Down, No Timeframe Yet