One of the biggest, if not the most important issue in journalism right now is the transition into the digital age.  Venerable print news outlets are struggling with the onslaught of readily available, free information on the internet.  The ones that have any chance of surviving have to stay relevant in a rapidly changing journalism scene where everyone is a reporter, and sometimes our attention spans short out after 140 characters.

Paywalls are always an iffy proposition, as outlets struggle to find a compromise that will keep readers loyal with fair pricing as well as generate revenue.  Newsday famously managed to attract 35 new subscribers in its first 3 months with a paywall.  Most recently, the New York Times’ institution of its paywall has also gone less than swimmingly.

How do traditional journalistic outlets engage a new generation of readers?  Well, possibly through social media like Facebook.

The New Yorker, the long-standing magazine filled with reporting, satire, fiction and commentary, has utilized their Facebook page to provide content only to people who “like” the page.  For a week, fans of the New Yorker will be able to read an exclusive article by novelist Jonathan Franzen.  The article is called “Farther Away: Robinson Crusoe, David Foster Wallace, and the island of solitude”  and involves Franzen rereading Robinson Crusoe, stranding himself on the supposed island that was the inspiration for the novel.

And here is the “fans only” page where the article is available: 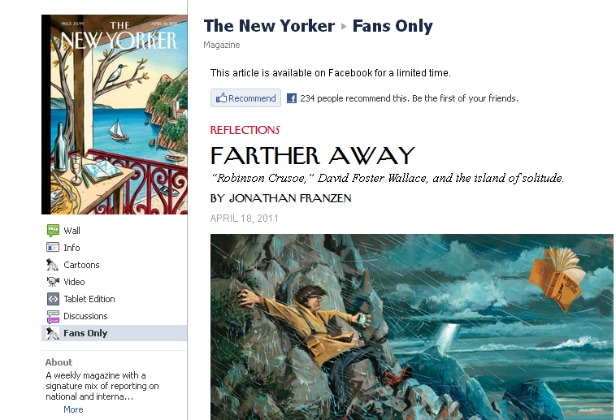 The New Yorker runs a semi-paywall where some articles are available on the site and some require a subscription to read.

This kind of Facebook-only promotion isn’t new to media.  Artists like Lil Wayne, Jennifer Lopez and Kanye West have all released songs exclusively through Facebook.  It will be nice to see print media offer rewards more often for engaging through social media.

Speaking to Bloggasm,  the New Yorker’s director of public relations Alexa Cassanos had this to say:

We have a million subscribers, but we only – I shouldn’t say ‘only’ because it’s a great number – but we have about 200,000 fans on Facebook. Obviously we think that that number could be bigger. And we’d also like to have people ‘like’ us or engage with us who aren’t subscribers. Who are maybe fans of Jonathan Franzen, or who love fiction, or who like David Foster Wallace, or people who may have had no idea that The New Yorker was on Facebook.