The Missing Credit of “The Social Network”

Last year, Facebook settled a trademark dispute with Aaron Greenspan, CEO of Think Computer Corporation and Harvard classmate of Mark Zuckerberg, who built houseSYSTEM, a section of which was called "The Universal Facebook". Now, Greenspan has written a lengthy piece for the Huffington Post, essentially complaining about the upcoming film, The Social Network, and how it completely ignores his alleged role in the founding of Facebook.

Greenspan’s story has been well documented. He has written a book about it, which is available for free online, and hasn’t had had a Hollywood movie made about it. Here’s a snippet from Wikipedia about his story:

On January 11, 2004, a few days after meeting Greenspan and concurrent with using the Universal Face Book on houseSYSTEM, Zuckerberg registered the domain name "thefacebook.com" independently. On February 4, 2004, when thefacebook.com launched, Greenspan recognized aspects of his own work in the site, and later came to believe that Zuckerberg was copying his work one feature at a time—a claim that Zuckerberg denied. Many of the features Greenspan created for houseSYSTEM, such as the digital event posters, electronic RSVPs, organizational pages, photo album, and marketplace, did eventually appear on thefacebook.com under similar names. Zuckerberg was aware of these features, eventually telling Greenspan at one point, "your facenet thing is hot." Social networking functionality was added to houseSYSTEM in March, 2004, and the name "FaceNet" replaced the "Universal Face Book." Regarding Greenspan’s allegations, Zuckerberg was described in The New York Times as "saying through a spokeswoman that he was not sure how to respond.

The Accidental Billionaires, the book on which The Social Network is based upon does mention Greenspan, though incorrectly as "Aaron Grossman", after Greenspan declined to cooperate with author Ben Mezrich on the book.  Mezrich did cite Greenspan’s book as a source. 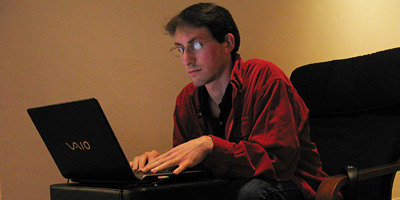 In a few weeks, Mark will take his place in that pantheon of American culture, The Internet Movie Database, when he, or rather, his character, appears in The Social Network, the movie that pretends to capture his story. At that point, his legend will be complete. Yet none of what you have just read here will be featured in the film, or even mentioned, because I refused to co-operate with another Harvard graduate who long ago sold his soul (and more recently, his manuscript to Sony Pictures), Ben Mezrich. Mr. Mezrich’s book, The Accidental Billionaires, is possibly best described as non-non-fiction, for though it cites my non-fiction book as a source, a staggering amount of his writing is simply invented out of thin air. (Much like ignoring friendship, ignoring fact can also be quite profitable.) Mr. Mezrich did manage to obtain the co-operation of Eduardo Saverin, Cameron and Tyler Winklevoss, and Divya Narendra, though the last three have been rather silent about that fact. Out of the five Harvard classmates who ultimately filed legal action against Mark in one form or another, I am the only programmer, and apparently the only one who did not sign away the right to discuss what happened, which in the spirit of openness is especially important to me.

In other words, despite not appearing anywhere in The Social Network, and despite not being called a co-founder of Facebook, Inc., the facts are what they are (and are publicly available for all to see). With the exception of social networking features that I intentionally left out to avoid a second privacy firestorm, and hoping to create a far more productive tool than what eventually emerged, I created The Facebook. Mark’s version is an adaptation, and an immensely popular one that certainly defies any precedent I know of, but it is hardly the original, and hardly the best version for us all as a society. It is simply the best one for him.

Later in the piece, he writes, "There is such a thing as bad press, but being forced to pretend that you don’t even exist, which is what The Social Network has forced me to do, is even worse."

As news of the legal settlement between Greenspan and Facebook came out last year, Zuckerberg was quoted as saying, "Aaron and I studied together at Harvard and I’ve always admired his entrepreneurial spirit and love of building things.  I appreciate his hard work and innovation that led to building houseSYSTEM, including the Universal Face Book feature…  We are pleased that we’ve been able to amicably resolve our differences."