A story that has been headline news in the UK’s mainstream media every day for the past week is that concerning a Premier League footballer who’s suing Twitter in a legal challenge.

The court proceedings, launched in London, aim to force the social network to disclose the identity of those behind the Twitter accounts that have named him publicly in tweets – original tweets, retweets, etc – that flout a court  super-injunction granted to him which prevents the media naming him or even mentioning that a super-injunction exists. 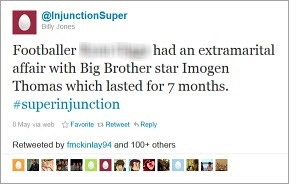 You can probably guess what the media frenzy has been about – not so much the footballer’s privacy, nor even his identity, but more about the unknown territory this lawsuit marks and the many questions it raises. 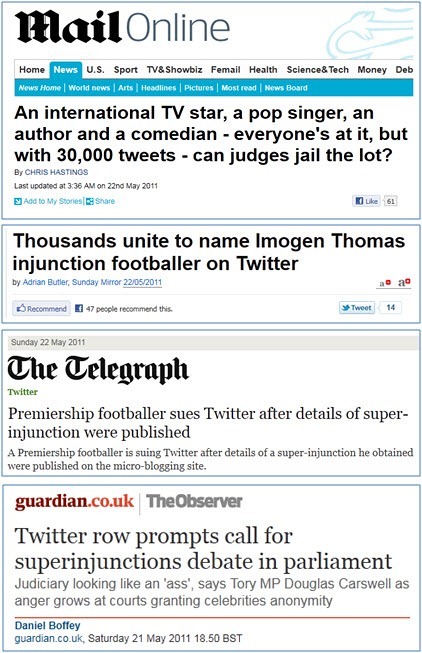 The examples in the screenshot of newspaper headlines this weekend sums the situation up quite well – a court order issued by a High Court judge in London that effectively gags the traditional media that publish or broadcast in England and Wales looks ridiculous when communication channels like Twitter enable anyone with an account and a net connection to say what they like about the matter including mentioning the name of the footballer allegedly at the heart of this.

But it goes deeper than that,  bringing into focus the matter of the super-injunction itself and how many people think it’s being abused by celebrities and others as a convenient method of legally stopping the press talking about their private lives.

Much of the opinions I’ve seen this weekend reported in the media from  establishment figures has phrases and words like “control”, “preventing unsavoury gossip”, “harnessing the channels”, “stopping unauthorized comments” and suchlike.

As anyone, anywhere in the world, with an internet connection and an opinion knows very well, none of that matters much in contemporary society. Whether you think that’s right or wrong, it is a view of the new media landscape today. Things like court orders and super-injunctions (respecting copyrights, too) require everyone’s willingness to play the game. It’s worked for years because that’s what everyone did and enforcing any breaches was relatively easy when offenders were physically within your legal jurisdiction and were easy to identify.

That’s no longer the case. Huge changes in behaviours in society and the advent of near-ubiquitous internet connectivity, combined with oh-so-easy and inexpensive tools and channels to communicate opinion on a global level and at the speed of your network connection, turns such analogue concepts on their heads.

What I think all of this illustrates is the violent collision and disruption between society and technology, where the notion of preventing people from disobeying a rule of the game via a device such as a court order simply hasn’t evolved. It’s a dark side of the freedoms we all enjoy that, you could argue, lets people abdicate responsibility and their willingness to play the game according to the old rules.

That’s more than just a philosophical point and undoubtedly is part of debate and ongoing discussion about this situation that will continue to occupy the media (and anyone with an opinion) for weeks if not months and years.

Meanwhile, there’s that court order demanding that Twitter discloses who’s behind all the tweeting that names the footballer. Will a company based in the USA, not in the UK, abide by a ruling from a court that has no jurisdiction in that country? How will they see it across the Atlantic especially in  a country that values freedom of speech so highly where, in contrast,  privacy seems to be of greater interest over here?

[…] We also reserve the right to access, read, preserve, and disclose any information as we reasonably believe is necessary to (i) satisfy any applicable law, regulation, legal process or governmental request, (ii) enforce the Terms, including investigation of potential violations hereof, (iii) detect, prevent, or otherwise address fraud, security or technical issues, (iv) respond to user support requests, or (v) protect the rights, property or safety of Twitter, its users and the public.

You probably need to look at Twitter’s privacy policy to get a better of sense of what might be coming in this matter, eg this phrase from the section entitled “Information Sharing and Disclosure”:

[…] Law and Harm: We may disclose your information if we believe that it is reasonably necessary to comply with a law, regulation or legal request; to protect the safety of any person; to address fraud, security or technical issues; or to protect Twitter’s rights or property.

One thing I found interesting is that neither in the ToS nor in the privacy policy does Twitter mention any jurisdiction that governs such terms. But as I’m not a lawyer, it’s hard to know what relevance or importance that may or may not have.

So we await the next development. Twitter has seven days to respond to the London court order, which was issued on May 20.

May 23, 2011
Latest Posts
Registration is disabled.