Score one for the federal government, I guess. The Texas Senate was forced to abandon their plans to pass a bill referred to as the “Groping Bill” after the Transportation Security Administration played the federal trump card.

According to Forbes, The Groping bill would have made illegal any pat-downs performed by the TSA that involved touching the “anus, sexual organ, buttocks, or breast…including through the clothing.” Texas law enforcement would have been able to arrest TSA officials for sexual harassment. The penalty could range from fines of up to $4,000 and/or jail time.

The Texas House of Representative actually passed the bill, much to the chagrin of the TSA. They blogged about the passing of the bill, saying that “We wish we lived in a world where you could just walk on a plane with no security screening, but that just isn’t the case unfortunately. Aviation security agencies worldwide have been using pat-downs long before TSA was created to prevent dangerous items from getting onto airplanes.”

As the bill was about to be voted upon in the Texas Senate, the U.S. Attorney from the state passed out a letter that warned of the consequences of enacting the new law. Basically, the Groping law would be in violation of federal law, and states are not allowed to pass measures that regulate the federal government.

HB 1937 would conflict directly with federal law. The practical import of the bill is that it would threaten criminal prosecution of Transportation Security Administration personnel who carry out the security procedures required under federal statutes and TSA regulations passed to implement those statutes. Those officials cannot be put to the choice of risking criminal prosecution for carrying out their federal duties.

If HR 1937 were enacted, the federal government would likely seek an emergency stay of the statute. Unless or until such a stay were granted, TSA would likely be required to cancel any flight or series of flights for which it could not ensure the safety of passengers and crew.

Republican bill sponsor Dan Patrick withdrew the proposal after the realization that he wouldn’t have enough votes in the Senate to pass it. The U.S. government messed with Texas, and won.

The TSA is a popular punching bad across the interwebs, as images and videos from pat-down procedures often go viral. Last month, this video went viral of a 6-year-old girl being checked by an TSA agent:

And earlier this month, this twitpic also made the rounds showing what looks like the investigation of a baby for a diaper bomb. 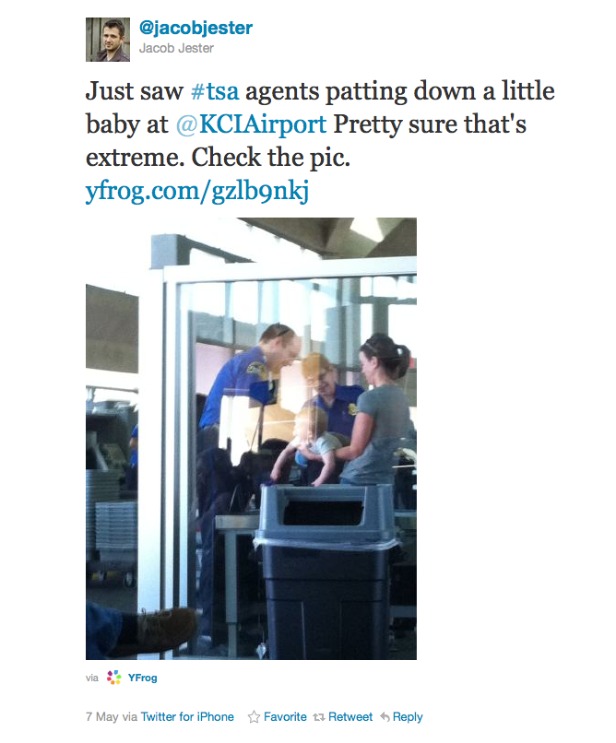 Facebook has a plethora of pretty funny pages to like if you too feel oppressed by the TSA – “When TSA gropes me, I will fake orgasm” and “If the TSA wants to grope me, they should at least buy me dinner first” being two of my favorites.

How do you feel about this state vs. federal government stand off? Should TSA agents pay for privacy invasions, or are they just doing their jobs?

May 25, 2011
Latest Posts
Registration is disabled.