Cell-phone texting has become the preferred form of basic communication between teens and their friends, according to a new report from the Pew Internet & American Life Project. 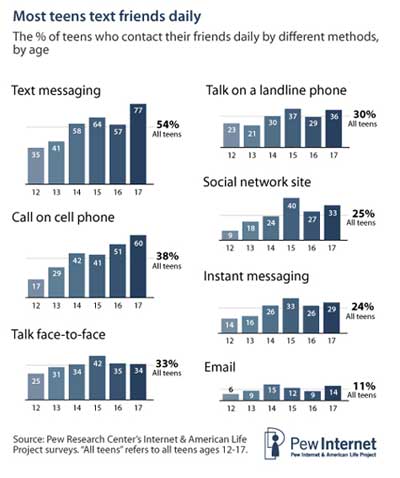 "The widespread availability of unlimited texting plans has transformed communication patterns of American teens, many of whom now conduct substantial portions of their daily conversations with their friends via texting," said Amanda Lenhart, Senior Researcher at the Pew Research Center’s Internet & American Life Project and a co-author on the report.

"But what’s important to remember here is that this is a shift in the location and style of teens’ communication with friends, not necessarily a radical change or expansion of it."

The survey found 75 percent of those ages 12-17 now have cell phones, up from 45 percent in 2004. These cell phone users place calls on their phone much less often than texting. On average tens make about five calls per day on cells. They still to prefer to deal with their parents by calling them instead of texting them.

Pew also found teens uses their cells for a variety of activities besides texting and talking including: