Earlier this month, Arrington waged a blog war of sorts against fellow AOL tech blog Engadget, which drew a lot of media attention, and got other tech bloggers asking questions like, "How long will Mike Arrington possibly last as an AOL employee?"

Now, Arrington has used his popular blog to criticize more (possible) internal workings of AOL – the ad sales team. In a blog post yesterday called "Real Blogs Don’t Have Interstitial Ads", Arrington talked about an interstitial Dell ad that had been appearing on the site. When users first visited the blog, they would be greeted with an in-your-face ad that they had no choice but to acknowledge. 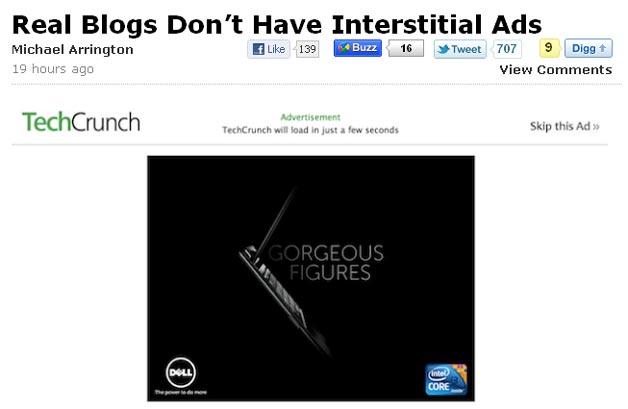 While acknowledging that the ad was annoying, Arrington wrote:

In the past our sales guys have brought up these kinds of ads, and our CEO Heather has shot them down. In this case I’m not sure who’s responsible. AOL has now taken over some of our ad sales, I believe. And our awesome sales team (who has to put up with stuff like this) is handling the rest. I think so anyway, normally I don’t pay much attention to that side of the business. So far my internal requests for more information have been ignored.

Whoever did it, I’m going to try to stop it. Which will probably involve six hours of internal meetings and at least one power point deck. So at least you know that it’s going to cause me a lot more pain than it’s causing you.

We’ve seen no indication that AOL is pissed off, and they knew what they were getting when they brought Arrington and his blog on board. In fact, they made it clear from the get go that TechCrunch wasn’t expected to hold back on AOL criticism just because it was part of the team.

Clearly, Arrington is happy to stand up for the integrity of his blog regardless of the corporate ownership that paid to have it. He took a lot of criticism for his flame war with Engadget, but you can’t say he doesn’t care about TechCrunch.

You have to wonder how Dell, the advertiser feels about the whole thing.