Today marked the debut of Tesla Motors on the stock market, and the electric car company did rather well.  Lots and lots of other companies suffered losses, however, and the ones we tend to cover at WebProNews were hit especially hard.

Now, Google did outperform the Nasdaq by only sliding 3.77 percent.  But then things got ugly.  Microsoft’s stock fell 4.07 percent, and it’s still headed down in after-hours trading.  Yahoo’s stock, meanwhile, dropped 4.68 percent, and it’s also continuing to sink.

As for a couple of companies that don’t participate in the search game, eBay’s stock fell 4.93 percent, and Amazon really suffered, with its stock losing 7.80 percent of its value. 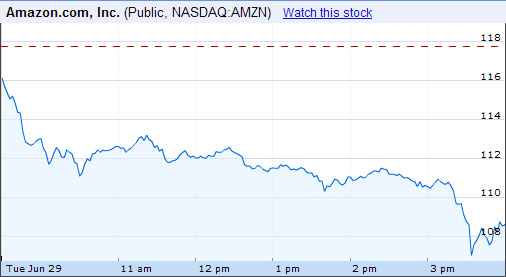 This shouldn’t necessarily alarm anyone; we’ve all seen worse things occur in the past year or so.  Plus, the deficits could be erased within a week (or 24 hours, given how spastic the market has been).

Still, today at least counts as an unfortunate setback that seemed worth documenting.