Twitter announced a new feature today called "Twitter Tales". This is just a section to highlight stories from Twitter users about interesting uses of the service.

The official description is: "How do you use Twitter? We asked dozens of our users that exact question. What resulted from their responses is a series of quirky and inspiring articles. We call them Twitter Tales."

Twitter Tales has 3 sections: life, community, and humor. These may change at some point, but these are the categories that the currently feature stories fall into.

In the life section, one user uses Twitter "as a form of therapy". In community, there is a crowd-sourced account aimed at helping people "avoid pitfalls on their daily commute", and in the humor section, one user provides what Twitter describes as "a witty and honest behind the scenes look into her blog writing". 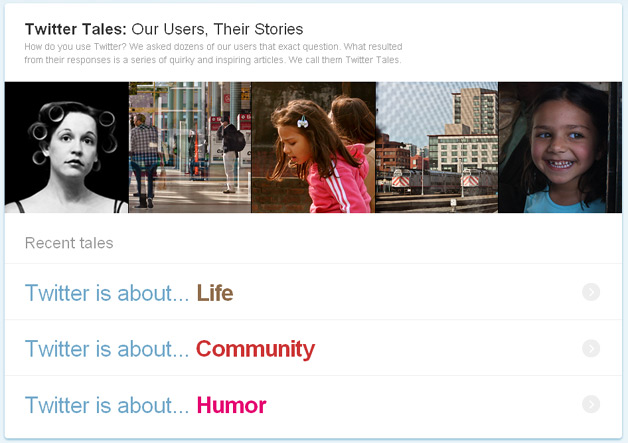 When Facebook announced its 500 million-user milestone, it also launched a "Stories" app for sharing stories about how people have used Facebook. Twitter Tales certainly echoes that (not to mention Google’s Search Stories).