Dr. J. Craig Venter talked about the creation of synthetic life and its potential to solve world problems at SXSW Interactive today. Venter is credited as one of the first biologists to sequence the human genome. He founded Genomics, he Institute for Genomic Research, and the J. Craig Venter Institute.

Now, he works at creating synthetic life – code to create life that organic cells recognize as their own. He has done this with bacteria, and his research has huge implications on the future of the human race.

I’m not going to attempt to report on the biological specifics the man discussed, but quotes that stuck out, that are likely to resonate with many people are things like, “We can build robots…all without human intervention,” and “The software is actually building its own hardware” (the hardware is the virus – the sotware is the dna). 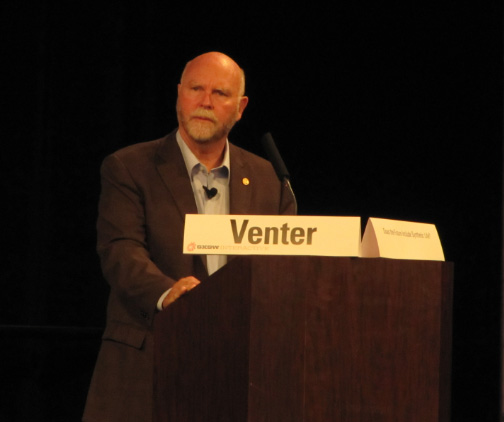 “Life is very dynamic,” he said. “We have to constantly renew.” He threw out the stat: each year there’s about sixty million people that die. While the number of those dying from infectious diseases is on the decline, thanks to new vaccines, the number is still large.

“We can make a new flu vaccine in 24 hours,” said Venter.

Another stat: 30 million people on the planet have HIV.

The problem with HIV, he says, is that it evolves so rapidly, it’s hard to keep up with it in vaccines. “We need something to keep up with it.” That’s where Venter’s research may be able to help – if the right software can be written to keep the evolutional pace up with that of the virus.

He also talked about how the research can potentially lead to solving fuel problems based on nature. Last year, he partnered with Exxon Mobil on algae for use in this area.

Venter said, “We can write this new software of life. The challenge is: can we build these new species/tools to solve” fuel problems, medical problems, etc. “while better understanding life as we go forward.”