Security firm Symantec has announced that during the World Cup it expects social media activity to spike dramatically, and predicts a concurrent rise in fraudulent activity on the web in general, and social networks in particular.

"The 2010 Football World Cup may be the first to be held in Africa, but it is also considered by many to be the first time that millions of fans will be able to make significant use of social networks to boost their experience," a representative for Symantec tells WebProNews. "Social networks like Twitter and Facebook will play a major role in World Cup 2010 as football fans display videos and photographs, share anecdotes and, perhaps most importantly, showcase their football expertise in heated debate." 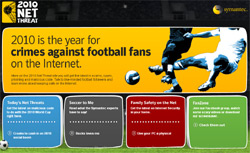 "Users are cautioned to resist the temptation to simply click on just anything, no matter how alluring it may appear," the company says. "Symantec research has shown that the majority of cybercrime attacks happen through legitimate websites that have been compromised by attackers the victims are unaware that while they are on a normal looking website, they are, in fact, exposed to malicious content."

"Users should also beware of accepting new friends claiming to be likeminded football fans and be especially wary of new sites set up around teams or specific players," urges Symantec. "Traveling fans should not reveal details of their current whereabouts on the social networks. Criminals are known to monitor the sites and use this information to plan robberies."

The firm actually has a site dedicated to information about World Cup-based security threats, which you may find helpful. The page comes with links to become a fan on Facebook and follow them on Twitter, which may also help keep you in the loop with any new related findings.

Social networks have already been making a point of encouraging fans to engage around the World Cup. For example, we looked at a couple offerings from Facebook and MySpace. Google showed us what the search activity has been like.

Facebook's Guide to the World Cup